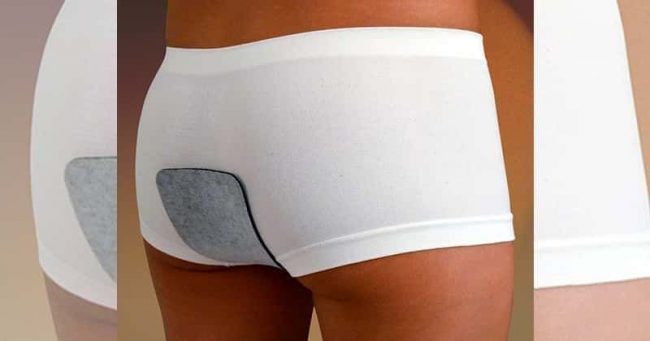 Flatulence is normal, but being called a “fart machine” isn’t the greatest achievement in life, right? Let’s not ignore the fact that people will definitely run away from the foul smell of your fart.

According to health experts, a healthy person farts 5-15 times a day. Well, some people have hard time sticking to this number which is why inventors came up with the idea of creating the Flatulence Deodorizer.

It’s a charcoal-based pad you can attach to your underwear in order to neutralize the bad smells. The pads are designed by Flat-D Innovations, Inc., and according to them, these pads work like activated charcoal underwear that’s more economical.

Charcoal provides a lot of benefits, and has great ability to absorb odors and toxins. It’s often used to filter liquids and gases. Activated charcoal fabric is the latest invention, and the carbon is actually embedded in the fabric.

The material used in these pads is 1/16th of an inch thick. You can wash the pads repeatedly, and it won’t lose its effectiveness. The pad is laminated on both sides with a thin layer of polyester which makes it strong and durable. The slim pads are breathable and light, and wearers won’t even notice them.

If u are intrigued by our ‘Doggie Fart Busters,’ here’s the human version: Flat-D Flatulence deodorizer. I’ts real. pic.twitter.com/OurkitUhf0

The company also adds that the material is safe, and doesn’t damage skin. Designers say there are no side-effects, adding that the pads are hypoallergenic.

Activated carbon works like a sponge, and absorbs gases at a micro level. These pads can’t harm the environment.

Underwear with flatulence deodorizer pad. Never again will u have to stop during a rootcanal because you need to fart pic.twitter.com/J8UwpSqLRc

Several people have tried these pads, and the reviews are quite positive. Maria says she finally enjoys sleeping in the same room with her spouse, adding that the pads have to be placed directly up to the “spot.”

Another customer said her colleagues no longer complain of her “crop dusting.” She even bought 10 of these!

15 Quotes on Love, Life and Peace by John Lennon