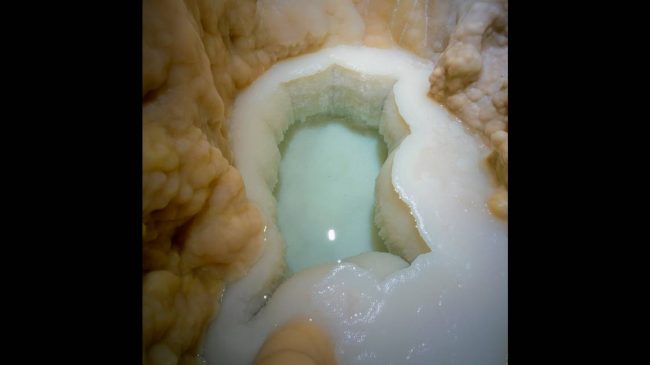 A milky blue ancient pool was found 700ft below ground in New Mexico Cave, and it is believed to have never been seen by human eyes.

Our planet is a fantastic place, a treasure trove full of wonders left for us to discover and marvel at!

Can you imagine how many of its truths are yet to be brought to light? How many surprises are left for us to uncover?

In New Mexico, a splendid network of “virgin” cave passages has been found underneath Carlsbad Caverns National Park. It is believed that no human has ever seen this marvelous pool, which lies 700 ft. below the park.

As posted to their official page on Facebook, Carlsbad Caverns called the site “completely pristine” and stated that they consider that the bacteria which live in the water had “evolved entirely without human presence.”

The extraordinary pool in the cave network is surrounded by white frosted rock, and filled with milky aquamarine liquid which looks like thick lime yogurt.

Carlsbad Caverns natural and cultural resources chief Rodney Horrocks explained that it “has been isolated for hundreds of thousands of years and had never seen light before that day.”

Posted by Carlsbad Caverns National Park on Sunday, May 31, 2020

The passage was first found in 1993 and it lies 700 feet below the entrance to Lechuguilla Cave, which is in the top 10 longest caves on Earth. yet, no one had entered the network until last year.

Wisshak and his team went on multiple “rope drops” in the course of the expedition, and mapped out 1.3 miles of passages. Wisshak posted on Facebook that exploration in caves “ sometimes yields wondrous sights.”:

“This cave pool, found in Lechuguilla Cave, appears to be completely pristine. The edges beneath this pool appear to be ‘pool fingers’, which could be bacterial colonies that have evolved entirely without human presence.”

While some may find the discovery of the alien-like cave disturbing, geoscientist and expedition leader Max Wisshak said that the water inside is in fact “crystal clear,” and its creamy appearance is in fact just an optical illusion.

Horrocks explained that the pool has a width of approximately one foot, length of 2 feet, and depth of several inches. They believe the water has come from ancient rainwater that dripped through the limestone placed above, flowed along the walls of the cave, and fell into the pool.

Microbiologists have already found new microbe species in the pools of Lechuguilla Cave– such as the “Lake of Liquid Sky” discovered in 1993.

Therefore, this discovery could provide further results. The time of the formation of the cave network is unknown, but the expedition also found many bat skeletons, and some of them are believed to be thousands of years old.

“Such untouched pools are scientifically important because water samples are relatively free of contaminants and the microbial organisms that may live in those pools are only those that belong there.

The team took many special precautions to prevent contaminants from reaching the pool. No visible signs of life were found inside, except for the bat skeleton remains.

Wisshak is currently applying for grants to continue his research at Lechuguilla Cave and the rare barite crystals. There were several similar pools in the cave network, and the largest one has been named the “Lake of Liquid Sky”.

There are 118 caves at Carlsbad Caverns National Park found until the present day, but it is believed that many more are out there, waiting to be discovered.

Martian Meteorite Discovered In Sahara Desert Is Evidence Of Water On Red Planet 4.4 Billion Years Ago