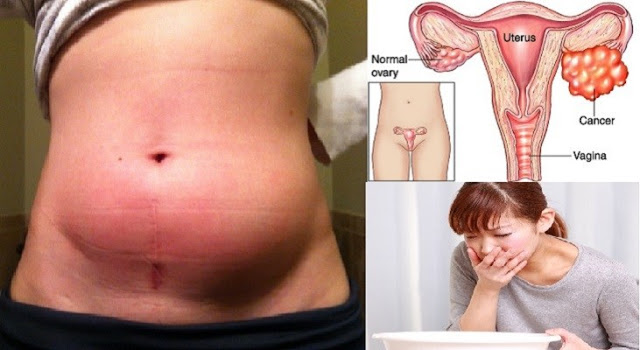 Unfortunately, a growing number of women nowadays are diagnosed with ovarian cancer. Statistics says that at least 550 women are victims of this kind of cancer per year. It can be caused by age, genetics, or uncontrolled use of oral contraceptives.

What is of vital importance is to never ignore the symptoms of ovarian cancer, as its early detection can save you. Namely, 80% of women discover this cancer too late.

Therefore, you need to know and recognize the signs of ovarian cancer:

Irregular menstrual cycles can indicate the existence of ovarian cancer. In most cases, women older than 55 are most likely to suffer from ovarian cancer, but it does not mean that younger women are protected from it. Namely, even young girls who have not had their first period can be victims of ovarian cancer.

You should check the cause if you have noticed that your stomach is bloated like you are pregnant, as it may also indicate ovarian cancer.

Especially in the early stages of ovarian cancer, the main target is the digestive tract and the abdominal area. Medline Plus warns that you should take care if you frequently suffer from stomachaches, loss of appetite, constipation or gases.

These symptoms are more often associated to other causes, but the excessive hair growth or the appearance of dark hair may also be a result of ovarian cancer. Nevertheless, this cancer may also lead to hair loss as well.

Frequent backaches can be a sign of ovarian cancer, unless you suffer from arthritis or osteoporosis.

Pain in the stomach and pelvis

You should be warned by the constant stomach ache, or pains in the pelvis, as they are serious symptoms of ovarian cancer.

A famous gynecologist, Jeffrey Stern, suggests that ovarian cancer can cause constipation, abdominal pain, weight loss, as well as nausea.

You may often understand this feeling as a digestive issue, but in fact, it can be one of the most prominent ovarian cancer signs.

According to Medical News Today, in its early stages, ovarian cancer can also cause pain during the sexual intercourse. This pain is a result of the pressed and painful pelvic area, and the frequent or urgent need to urinate. Note that you need to see your doctors no matter if the pain is almost insignificant or unbearable.

Ovarian cancer can also be indicated by a shortness of breath, loss of appetite, vomiting and frequent exhaustion. At least one of these signs are felt in the early stages of cancer in 80% of the cases.