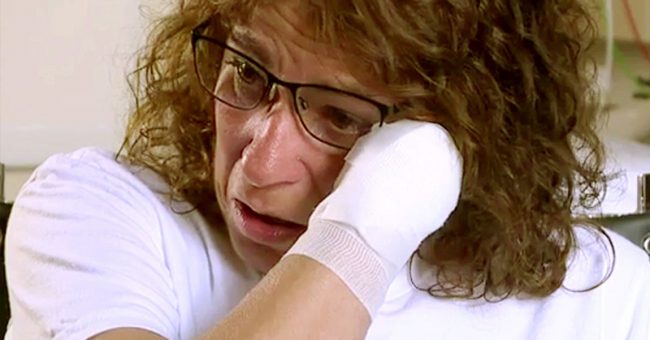 An Ohio woman spent 10 days in a coma, 80 days in the hospital, and ultimately lost her arms and legs due to an infection caused by dog saliva.

Marie Trainer claims she only remembers feeling sick, and then woke up from a medically-induced coma to see that her arms and legs had been amputated. The woman had just returned home from a vacation with her husband and felt nauseous and back pain with fluctuating temperature.

As soon as she arrived at the emergency room, her condition aggravated, and she developed sepsis, the body’s response to a severe infection that can cause organ failure and even death.

She then developed gangrene, where the infection makes part of the tissue die.  After a while, she developed blood clots and doctors had to amputate her limbs to save her from death.

The doctors described it as just the perfect storm, as somehow, the dog saliva entered her system and caused this case of events.

She first started feeling ill in early May after she came back from her trip to Punta Cana. She then thought it could have been the flu, but as her symptoms quickly worsened over the course of 12 hours, she was rushed to the emergency room.

Doctors found that she was suffering from both liver and kidney failure but didn’t know the cause, so they advised her husband to move her to a different hospital for a higher level of care.

She was taken to Aultman Hospital in Canton, Ohio, where she was placed in a medically-induced coma for about 10 days. Doctors there informed her family about the need for amputation, although they still didn’t know what was wrong.

After visiting another clinic for a second opinion on the amputation, the doctors from Aultman discovered that it was capnocytophaga that led to all her problems, a species of bacteria that lives in the mouths of some mammals, including humans, dogs, cats, and rabbits

Since returning to Aultman, the woman has undergone eight different surgeries, and she is now awake. Her relatives hope that they can get her out of the hospital soon so she can begin rehabilitation.

Trainer has two dogs and doctors believe they must have licked a small scrape on her arm which in turn led to a life-threatening infection.

Capnocytophaga is a bacteria type that lives in the mouths of some mammals, most commonly cats and dogs. There are different species of capnocytophaga, and C. canimorsus and C. cynodegmi are the ones most associated with animals.

Capnocytophaga is rare, but it can cause an infection that in turn leads to severe complications, including sepsis. People with a weakened immune system, individuals who have had their spleens removed, have cancer or HIV, and ones that drink alcohol excessively are at an increased risk.

It is usually transmitted through a bite or scratch, and most of the reported infections occur in tissues around the mouth and throat, such as the gums, nose, throat, and lungs. The bacteria then enter the bloodstream, and cause an infection.

Capnocytophaga can cause various life-threatening complications, such as gangrene, heart attacks, and kidney failure.

The symptoms can vary, but include diarrhea, fever, stomach pain, headache, confusion, vomiting, muscle and joint pain, swellings, redness, blisters, and pain around the wound.

Fortunately, since 1976, approximately 200 cases of these bacteria have been reported worldwide, but it is estimated that up to 84 percent of cats and 86 percent of dogs have this bacteria.

To prevent it, make sure you have your new pets examined by an experienced vet to ensure they don’t have any physical or behavioral problems. Also, do not let animals lick your face or wounds.

If you have a scratch or a bite, wash the area with soap and water. In case you begin experiencing symptoms within two weeks, seek emergency medical care.

Capnocytophaga is normally present in the mouths of animals, so you don’t need to be worried about your pet having the bacteria, as transmission is very rare even if it is bitten or scratched by another pet. Yet, it would be best to follow up with your experienced veterinarian to ensure its wellbeing.