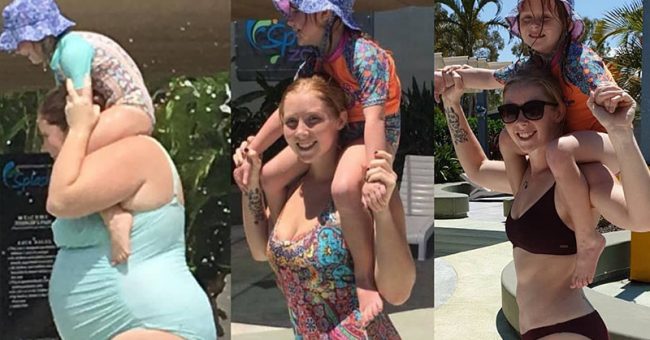 Losing weight can be highly challenging, and the entire process requires strong will and determination, as many people quit within the first few weeks.

Dieting can be hard, but it is possible, and as soon as one notices visible results, it just gets easier. However, aggressive diets are not a good option, as they can harm health and lead to yo-yo effects.

Therefore, it is much better to go step by step and gradually achieve your goals.  Keely Dellit, a mother of three, took a baby-step approach and managed to get the body of her dreams. In only 14 months, she lost  125 pounds!

She did not rely on slimming pills or teas, or any other faster way to get in shape. Instead, she was patient and decided to enjoy the long journey but lose weight in a healthy way.

Since her teenage years, she has been working in a fast-food restaurant, so she started gaining weight, and her pregnancies contributed to her weight, which was almost 280lbs.

After giving birth to her third child, and she stepped on the scale, she weighed 278 pounds, and at this point, she knew that she had to do something in order to restore her healthy body.

Her plan involved healthy wholesome eating and daily exercise. She decided to make one tiny change per week, which helped her ease into a healthier lifestyle.

Initially, she decided to cut out all kinds of fast food and treats. Then, she chose smaller portions. As the weeks passed, she gradually made slightly healthier substitutions (for instance, she ate grilled chicken instead of crispy chicken.)

#throwback Thursday 18 weeks, 4.5 months difference, 38kg (83lbs) lost. No expensive diets, MLM scammy products or gym memberships were required. Just consistently healthy WHOLESOME eating and daily exercise. You can be a busy mum and still find time to put yourself and your health first and take back control of your life.

She started taking smaller portions of meals, and eventually gave up on fries, drank sparkling water instead of juice and soda, and replaced white with brown rice. Next, she consumed plant-based milks instead of dairy, ate at home instead of ordering takeout, and she gradually completely transformed her diet, that was now completely healthy, and very low in carbs.

Homemade tuna patties with brocollini and space for something extra to add in (probably avocado because im obsessed) Little bit of meal prepping to make sure I have a healthy lunch option ready to go. If I’m not prepared I’m way more likely to talk myself into getting hot chips and gravy and telling myself it’s easier and quicker.

She also drank a lot of water.

Here is an example of her daily menu:

Additionally, she says that she did not follow a specific exercise plan for the first 6 months, she just went walking or did some workouts she found on YouTube. Afterward, as she strengthened her body, she joined a boot camp class. She loved the boot camp sessions and eventually became a certified personal trainer.

In only 14 months, she lost 125 pounds, and it was possible only because she made her weight loss goal her priority.

She admitted facing numerous difficulties during the way, as she felt she was missing out a lot every time she had to say NO to delicious things like pizza or cupcakes, and she still struggles with these feelings.

She says that she needs to remain mindful of her food choices every single day, in order to improve. Yet, she adds that she also found her passion, health, and fitness, and she is now able to help others who are going through similar struggles.

She advises people to start slow, and focus on all the little successes they experience along the day.

14 Soldiers Photographed Before, During & After War