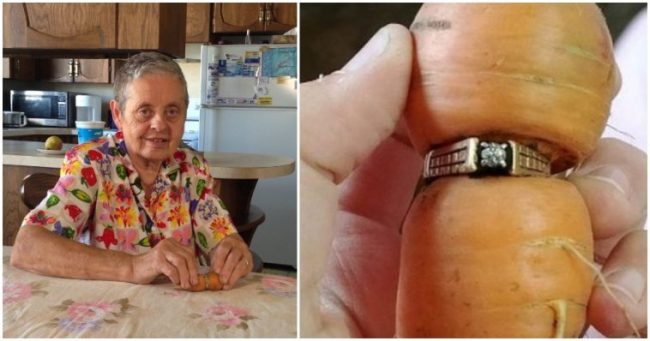 Sometimes, life can be really strange, and if you have been a witness of some rare coincidences or you have been luck-struck, you know that those moments actually enrich our lives.

One night while preparing dinner, Colleen Daly went to her garden, which has been in the family for more than a century, as she decided to make a salad.

Her husband grew up there, and as a child, his mother harvested the salad from just outside the back door. However, that afternoon, Colleen noticed a strange carrot among the other vegetables, and when she approached it, she saw a gold ring around it!

When she showed it to her husband, he recognized it immediately and told her the amazing story of the ring.

Back in 2004, his mom Mary Grams lost it while weeding in the garden. Yet, kept it a secret from all but her son, as she had been wearing that ring on her finger since 1951, a year before she married her husband Norman, so he would overblow the whole issue if she told him.

Therefore, she just bought another ring, just a bit smaller, and kept it wearing it all her life. However, 13 years later, Mary and Norman had long since moved on to a new place in Camrose, and their son and his wife started living in their family home. And one sunny day, Mary’s beloved ring was found.

Her husband has passed away 6 years ago after the couple celebrated their 60th wedding anniversary.

Now that Mary finally got the real ring back, she says that she would do her best to never lose it again. In the end, it turned out that what is meant for you will never really get away from you.

In most cases, when someone loses something precious, he eventually makes peace with the fact that it is lost forever, and they will never get it back again.

However, this story proves that sometimes, luck can be on your side. Mary has been lucky enough to find her engagement ring again, even after her husband’s death.

Thankfully, it still fits, so Grams intends to wear it.

Feta: The World's Healthiest Cheese That Nobody Talks About