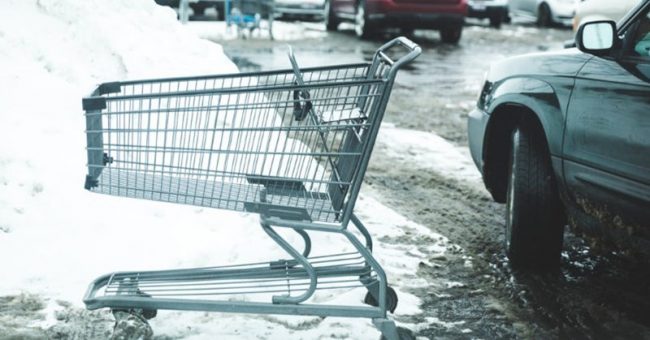 One Twitter user posted a theory that sparked quite a lot of conversation online- Do you return the shopping cart at the grocery store?

Social media are increasingly becoming an arena for public debate. Platforms encourage discussions on all kinds of subjects and help people stay engaged and be exposed to new information and different points of view.

One such debate has garnered much attention- and it is actually a very simple personality test.

Namely, one Twitter user suggested the “ shopping cart theory”, which reveals people’s personalities based on whether they return the shopping cart to its designated spot after use or not.

People who put the cart away, back in the store, or in the parking lot carousel, even though you are not obligated to, and won’t be sanctioned in any way, are kind, and considerate.

On the other hand, those who leave the cart to be collected by the store’s employees, are the opposite.

The author of the theory concludes that “the shopping cart is what determines whether a person is a good or bad member of society.”

Well, let’s analyze it a bit.

We have to admit, it does make sense. Being kind does not cost a thing, and except for extreme emergencies, there is no justified excuse to not make a little effort and take a few moments of your time to take back your cart and help someone else.

On the contrary, it is not illegal to leave the cart either. You are not obligated in any way to do it, and you won’t be fined or banned if you don’t return it. That is exactly what makes the gesture kind and considerate.

This theory, therefore, argues that those who care for others and want to ease their life have a good heart. The ones who care for themselves only are lazy and selfish.

The theory was posted on Twitter by a user named Jared and it initiated a lot of debates. However, most users agreed with it.

“Idk I just feel like as someone who once worked a retail job, I might not be required to put it back but the guy working would really appreciate it so I might as well make someone else’s day easier?? Idk it’s more about respect for the worker and not the unspoken societal law.”

“I mean yeah that’s the idea. having that level of respect and consideration for a stranger is what makes you a “good member of society”.”

On the contrary, others gave some good reasons for not returning the cart, even if it is not an emergency.

“A good reason not to return it is if you are alone, with young children, and you are too far from the return to leave your kids alone in the car.”

Some Twitter users claimed that returning the carts is someone’s job, and considering that they are simply trying to help them keep their job, get more hours, and make more money.

People who had worked or still do were quick to explain that these claims are inadequate.

They explained that grocery stores don’t hire workers just to collect carts, and that is just one of the many things they have to do. It is not an opportunity for them to make more money or get more working hours.

Furthermore, they explained that this job, in fact, is very hard in extreme conditions, such as freezing cold, pouring rain, or extreme heat. Therefore, it is much easier for an individual to take a few moments and take back the cart.

It seems that this is an endless debate. There is even an entire Twitter account dedicated to it called Cart Narcs!

Additionally, some explained that the theory generalizes things, which is not adequate.

Ashlee Boyer maintained that is not fair because it doesn’t allow for people with disabilities:

“How about we don’t judge someone’s character based on physical ability? Like, ever? I can see an instance where someone with a chronic condition has a flare-up and it’s all they can do to get the cart to their car.”

Many questioned her claims as well.

They said that in case a person can get the cart, use it for shopping inside the store, and take it to the car, it is then logical that he can return it. Nevertheless, the consensus is the theory refers to those who have no real reason not to return their cart, and not for the ones who are physically incapable.

In general, people agreed that people who don’t return their grocery carts are lazy, inconsiderate, and self-centered.

What do you think? Do you agree?

The Average Woman Is No Longer A Size 14