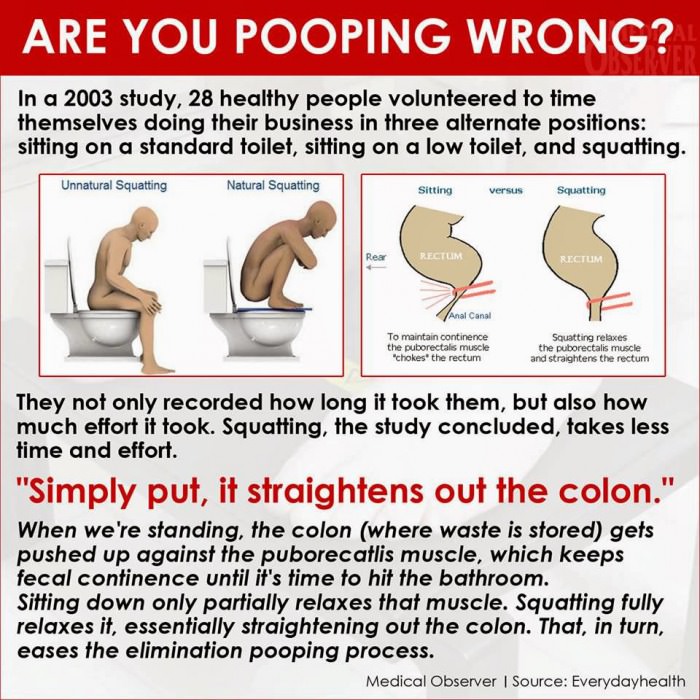 Have you ever thought that you just might be pooping wrong? Many experts say that Western civilization has not been eliminating the right way for generations.

Scientists at the Stanford University Pelvic Floor Clinic explain that the human body is designed for squatting, not sitting. If you check the history of bathroom habits, you will see why this statement makes sense. Studies have shown that improper fecal elimination causes appendicitis, colon cancer, inflammatory bowel disease, hernias, diverticulosis, and hemorrhoids.

Many other health conditions are also associated with improper fecal elimination.

In 2003, a group of scientists conducted a study that involved 28 people. The participants were supposed to poop in three positions: sitting on a low toilet, sitting on a high toilet and squatting. Scientists agreed that pooping was easier and took a minute less for participants who were squatting.

“There is definitely some physiologic sense to squatting,” explained gastroenterologist Anish Sheth, MD, co-author of the books What’s Your Poo Telling You? and What’s My Pee Telling Me? “Simply put, it straightens out the colon.”’

People from Everyday Health say, “when we’re standing, the colon (where waste is stored) gets pushed up against the puborectalis muscle, which keeps fecal continence until it’s time to hit the bathroom. Sitting down only partially relaxes that muscle. Squatting fully relaxes it, essentially straightening out the colon. That, in turn, eases the elimination pooping process.”

Bockus’s Gastroenterology, a standard medical text from 1964, also agreed on the subject: “The ideal posture for defecation is the squatting position, with the thighs fixed upon the abdomen.”  And now you see why our ancestors pooped daily until the middle of the 19th century.

3 Amazing Drinks That Will Help Burn Your Belly Fat

Mysterious Honey Discovered That Kills All Bacteria Scientists Throw At It