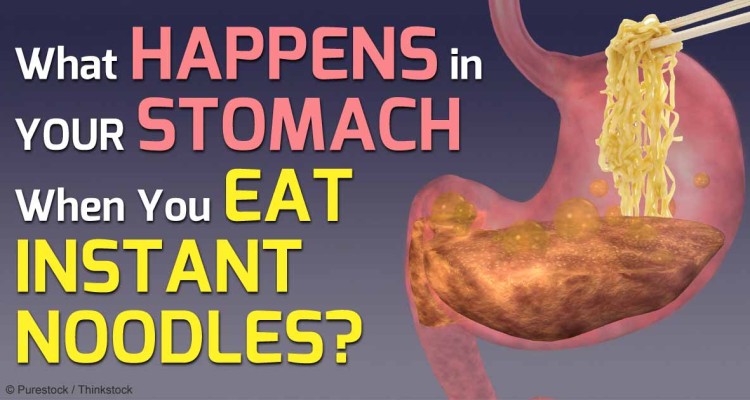 Instant noodles are the most affordable meal for people who do not have much time or money, especially college students who live far from their homes. If you believe that instant noodles are not as bad as other kinds of fast food, such as burgers, fries, and burritos, make sure you read this article, and you will sure see things from a different angle.
Dr Braden Kuo from the Massachusetts General Hospital did an experiment that was first in its kind to discover what actually happens in your digestive tract after you consume instant noodles, or ramen noodles, if you prefer it better. He used a pill-sized camera to conduct his experiment, and the findings of his action shocked the world.

Ramen noodles do not break down even hours after they are consumed
In the video above you can see how ramen noodles look inside a stomach two hours after they are consumed. Even at that phase noodles remain whole, which is not the case of homemade ramen noodles. This is horrifying in so many aspects.
One of them is the fact that this adds additional pressure to the digestive tract, because it is forced to work for long hours in order to break down processed foods, which is pretty ironic because processed foods do not contain much fiber and get broken down more quite fast.
In cases when food remains for too long in the stomach, it has a huge affect on the absorption of nutrients. Speaking of processed ramen noodles, they have almost no nutrients that should be absorbed, contain plenty of additives, including the preservative tertiary-butyl hydroquinone (TBHQ), better known as a toxin.
When TBHQ remains in the digestive system for too long, along with hard-to-dissolve noodles, you can only guess which are the potential dangers you are exposed to.
Five grams of TBHQ bring danger
TBHQ is a byproduct of petroleum, and it is oftentimes referred to as an “antioxidant,” which is quite wrong because it is actually a synthetic chemical that has antioxidant properties, and not a natural antioxidant.
This toxic chemical is added to a huge number of foods, including crackers, crisps and fast food, in order to prevent oxidation of fats and oils, and thus prolong shelf life.
TBHQ is contained in McDonald’s chicken nuggets, Kellogg’s CHEEZ-IT crackers, Reese’s peanut butter cups, Wheat Thins crackers, Teddy Grahams, Red Baron frozen pizza, Taco Bell beans, and many other popular food choices.
This chemical is also found in varnishes, lacquers, pesticide products, cosmetics, and perfumes in order to increase their stability and decrease evaporation.
During the 19th and 21st meetings, the Joint FAO/WHO Expert Committee on Food Additives brought a decision according to which TBHQ is safe for consumption at a level of 0-0.5mg/kg of body weight. (1)
However, the Codex commission estimated the maximum acceptable limit to be between 100 and 400 mg/kg, of course, depending on the food it is found in. (2)
According to this, chewing gums are allowed to contain largest amounts of TBHQ.In the USA TBHQ must not exceed 0.02 percent of its oil and fat content. ( 3 )The exposure to five grams of TBHQ can be lethal, as explained in the Consumer’s Dictionary of Food Additives, and a single gram of the chemical may cause: (4)

Even though TBHQ is not considered as a persistent toxicant, which means that it does not bioaccumulate and the body will probably eliminate it, when consumed through instant ramen noodles, human body receives prolonged exposure. As the Environmental Working Group (EWG) explains, TBHQ brings serious health risks, which was found in animal studies. These risks involve: (5)

Instant noodles and metabolic syndrome
The Journal of Nutrition published a study according to which women who eat noodles have a dangerously high risk of metabolic syndrome, which is not the case of women who do not eat that much noodles, regardless of their dietary habits or physical activity. (6)
About 68% of women who prefer eating instant noodles more than two times a week were at a higher risk of developing metabolic syndrome, which includes a great number of symptoms, such as central obesity, hypertension, high blood sugar, elevated triglycerides, and low HDL cholesterol levels.
What is even worse, if you have three or more of the aforementioned symptoms, you stand at a greater chance of developing diabetes and cardiovascular disease.
An earlier research based on the nutrient intake between people who eat instant noodles and people who do not eat these noodles proved that instant noodles have almost no contribution to healthy diet.
Noodle lovers have a poor intake of protein, calcium, phosphorus, iron, potassium, vitamin A, niacin, and vitamin C, when compared to people who do not eat these noodles. (7) But, they have a large intake of energy, unhealthy fats and sodium. A package of instant noodles contains up to 2,700 milligrams of sodium. (8)
“Goods” contained in instant noodles
Apart from the large amounts of sodium and TBHQ, a classical serving of instant noodles contains many other health-threatening substances. Prevent Disease reports: (9)
“The dried noodle block was originally created by flash frying cooked noodles, and this is still the main method used in Asian countries, though air-dried noodle blocks are favored in Western countries. The main ingredients of the dried noodle are wheat flour, palm oil, and salt. Common ingredients of the flavoring powder are salt, monosodium glutamate, seasoning, and sugar.
…In June 2012, the Korea Food and Drug Administration (KFDA) found Benzopyrene (a cancer-causing substance) in six brands of noodles made by Nong Shim Company Ltd. Although the KFDA said the amounts were minuscule and not harmful, Nong Shim did identify particular batches of noodles with a problem, prompting a recall by October 2012.”
If you are looking for a particular reason to avoid instant noodles, this should be more than enough to you.
Instant noodles contain monosodium glutamate (MSG), an excitotoxin that has proven to overexcite nerve cells to the extent of damages and death, which causes brain dysfunction and damage, prompting or worsening learning disabilities, Alzheimer’s, Parkinson’s, Lou Gehrig’s, and many more.
Monosodium glutamate is about 78% free glutamic acid, which is actually the very same neurotransmitter used by human brain, nervous system, eyes, pancreas and other vital organs in the body that initiate important processes.
MSG is believed to be the ideal obesity drug, because it is used to fatten laboratory mice for the purpose of a particular study. So, if you are eager to maintain your normal body weight, avoid consuming MSG at any cost.
Eat whole, living foods to maintain optimal health
Eating instant noodles once in a while will sure not kill you, and the real problem lies in the increasingly popular habit of replacing real food with instant noodles and other highly processed foods. This is a perfect example of what this replacement can do to your body, because eating processed foods like instant noodles twice a week or more affects both health and weight.
Excessive consumption of processed foods causes weight gain and chronic disease, because such products are high in sugar, fructose, refined carbs, and artificial ingredients, and low in nutrients in fiber. Processed foods are addictive and designed to make people want more.
They stimulate cravings, and cause weight gain. They also lead to developing insulin resistance and chronic inflammation, and these both are a sign of any chronic disease. This should not surprise you, because people have lived great on veggies, meat, eggs, fruits, and whole foods for centuries, and processed foods are a modern invention.
Remove processed foods from your diet, and that requires an advance planning of your meals. But, when done step by step, this is not that complex. First, visit your local markets and look for in-season foods that are priced to sell. Then, plan your meals.
The same applies to supermarket sales. Your best option is to plan a week of your meals, and make sure you have all the ingredients you need on hand. You can do your prep work, which would make things a lot easier, especially if you do not have much free time.
Source: articles.mercola.com
Sources and References linked in Dr. Mercola’s article:

Signals Our Body Sends To Tell We Are Not Healthy – Do Not Ignore Them!