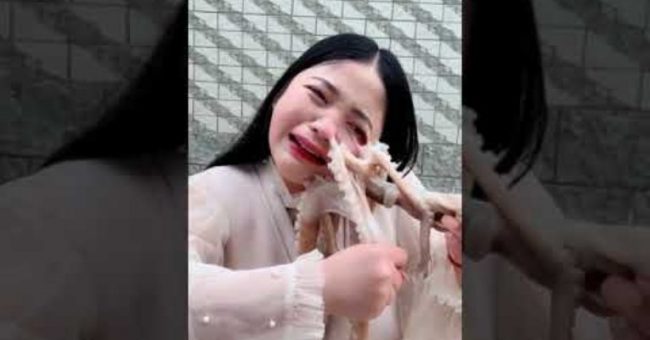 The era we are living in has become one rich in weird trends, bizarre challenges, and dangerous ideas, whose goal is to make people viral celebs.  The recent dangerous challenge by a Chinese woman who seeks for viral fame has shocked many- the “Eat-A-Live-Octopus Challenge.”

Namely, a young woman from the Jiangsu city of Lianyungang, nicknamed “seaside girl Little Seven,” tried to eat a living Pacific octopus to prove her fearlessness and recorded it in a 50-second video.

According to her Kuaishou account, the blogger loves eating seafood, and she has eaten a variety of cooked seafood, such as crayfish and lobsters, in her shows since she started her live-streaming channel.

In the beginning, the mollusk is firmly affixed to her face as she tries to bond with the sea creature, but the video quickly turns into a horror as she shrieks in terror while desperately trying to remove the octopus’ tentacles from her face.

She is horrified as she realizes that it has extremely strong sucking power that causes her great pain, as she is unable to remove it from her face.

A mature giant Pacific octopus has about 280 suckers on each arm, and each sucker has thousands of chemical receptors. It uses its tentacles to catch prey or defend itself from potential attacks.

During this fight, one of these tentacles is attached to the upper lip of the girl, and her lower eyelid is stretched to a grotesque extent. She eventually frees her face and is left with a bloody wound, while screaming that her face is disfigured. Yet, she promises her fans that she would eat the octopus the next time, and shared the video to the social media platform Kuaishou.

She has previously complained that none of her videos has ended up on the trending topics chart and revealed her desire to become famous, so she apparently achieved her goal.

She managed to make her video trending across China and around the globe, and without a doubt, people will remember her face.