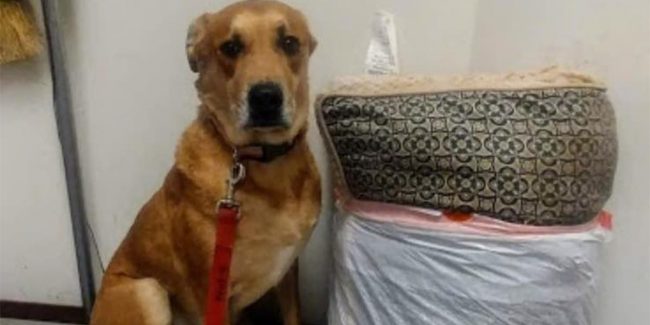 Wall-E the dog went through the same nightmare as many other dogs, leaving local shelters in a rather unfortunate situation.

Do you know that thousands of pets end up in shelters before and during the holiday season? It’s sad to note that some of these pets were once a beautiful Christmas gift. Owners don’t like the responsibility pets bring. They choose to leave them at the local shelter instead of taking care of the cute pups. Sadly, some people just want a new pet. What happens to the old dog? It becomes a stray.

Senior pets require better care and attention. Some of them get sick and the bills are pretty high. That’s why owners decide to give up on them and get a cute little pup.

Getting a pet is not that simple and people should not even think of getting one if they are not ready to give all their love and attention. It’s time to pay more attention to the people who abandon their pets just because they hate the responsibility.

Of course, every story has two sides and some owners don’t really have an option. But, abandoning a pet just because you don’t like it anymore is inhumane and cruel.

The story of Wall-E will bring tears to your eyes.

They brought all his stuff.. like it was gonna be there…

Wall-E was returned at MCACC West Adoptable Dogs. The shelter shared a photo of Wall-E and all the things he had by his side. His owner brought the dog to the shelter with his bed and all his toys.

The shelter asked for help and the comments section was full of heartbreaking stories.

According to employees at the shelter, the owner was “grief-stricken” when they had to leave the dog. It was an emotional separation, and everyone was crying.

Employees believe that the owner wasn’t a cruel person who hated the dog. The family had adopted him from the same shelter and took care of him for three years.

“This guy deserves a forever family who won’t give up on him. Please don’t bash his previous owners though. We don’t know the whole story. What we do know is the owner was heartbroken and crying. It was hard to finally help them leave. The staff was crying with the owners. We don’t believe this decision was taken lightly.”

Lynn Lee adopted the six-year-old pup almost immediately, and the doggy loves his new home. Wall-E went through a lot, but now he receives all the love in this world. This story sure has a happy ending!

The MCAAC shelter is obliged to take in every animal. The sad part? They euthanize dogs when the capacity is breached.

“We have over 800 animals in our shelter right now,” they explained. “Maricopa County Animal Care And Control (MCACC) is the second largest intake shelter in the United States. We have to euthanize when we run out of space because legally we have to take every dog that comes to our doors. We are at that point now despite exhausting ALL resources including rescues, transports in state and out of state.”

One Dragonfly Can Eat 100s Of Mosquitoes Per Day: Keep These Plants In Your Yard To Attract Them!