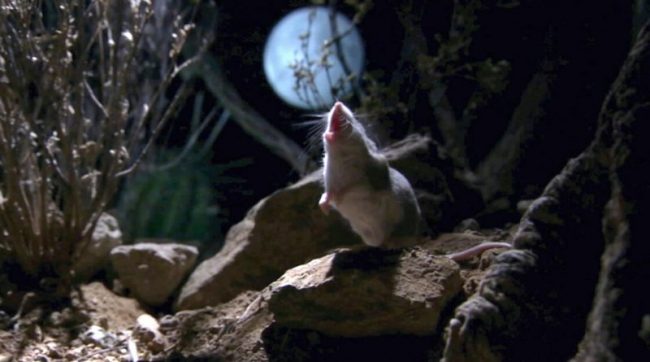 In the middle of the Sonoran Desert, there is a unique mouse species, known as grasshopper mice.

These mice can look tiny and cute, but they are made to survive in one of the harshest settings on Earth and are real natural killers, whose preys include insects, lizards, scorpions, and even, other mice.

They are distinguished from most other rodents due to their meat-based diet, and they regularly consume as large, or larger than themselves, preys.

The aggressive manners of these mice don’t improve with age. Rather than making their own nests, these mice take over burrows built by other rodents, and if necessary, they eliminate the occupants by force. The grasshopper mice will also kill and eat other rodents and even members of their own members in tough times.

Additionally, these mice are immune to scorpion venom, and their body converts the toxins into a pain killer. The share the desserts with the Arizona bark scorpions (Centruroides sp), which are the most poisonous scorpions in the world, and their painful venom causes muscle contractions and respiratory failure in people.

The nickname of werewolf mice is due to the practice to howl before a fresh kill. They throw their head back and let out a high-pitched cry, into the night sky. The ‘howl’ is pitched between 9-14kHz and if played back at a slower speed, it sounds like a wolf howling.

The howling is believed to be a way of scaring off predators, but also of communicating with other mice.

As night falls, this mouse emerges to find and disarm deadly scorpions. The poisonous scorpion venom is transformed into a soothing painkiller, so the little mouse can prey upon scorpions.

Yet, as the rising sun brings dangers, the mouse needs to find a way to survive during the daily heat and face other creatures in the desert, where the heat often reaches temperatures of 48°C.

Sperm Face Masks Are Becoming A Thing Now, Beauty Expert Says That It Can Slow Down Aging