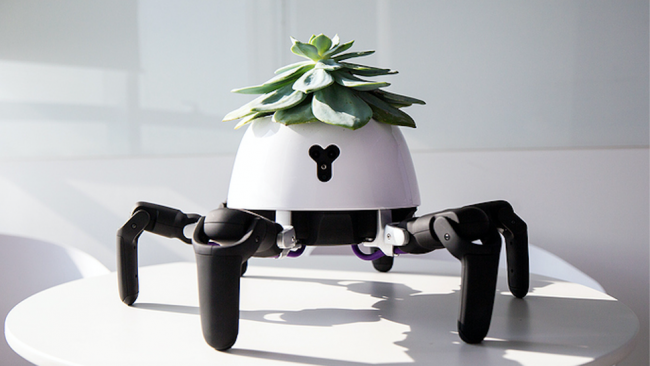 Houseplants transcend trends, and they have never gone out of vogue. They are a magnificent décor in every home, as they add lushness and color to the space, without requiring much from us.

Many of them offer numerous benefits for our health, since they alleviate existing symptoms, help breathing, clean the air, and boost memory.

Even though our hectic lifestyles do not leave us much time to take proper care of plants, plant-lovers would be pleased to learn that a new robot planter is there to remind them to keep their houseplants in great shape!

It was designed by the founder of Vingross, Sun Tianqi, after he saw a dead sunflower at a flower expo, and thought it could have been saved only if it was put in a sunny spot.

“In 2014, I went to see a sunflower exhibition and found myself focused on a dead sunflower near a ground of blooms.

The dead flower sat in a place that was always in a shadow. I had no idea how it ended up there or why it died – whether it was because of the lack of sunshine or water – but it was just there, and it was dead.

I thought if it could move a little bit, take a 30-feet walk out of the shadow to where the other sunflowers were, it would have lived healthily. But it didn’t.”

The idea triggered the creation of the HEXA Plant, a robot planter that moves plants to sun-exposed areas in the house.

“Plants are passive. Eternally, inexplicably passive. No matter if they are being cut, bitten, burned or pulled from the earth, or when they lack sunshine, water, or are too hot or cold, they will hold still and take whatever is happening to them.

They have the fewest degrees of freedom among all the creatures in nature. This is simply the default setting that nature gives to plants.”

The goal of the robot is to keep the plants alive, so it finds sunlight and shade for them, and even throws a temper tantrum by stomping around when they need watering. The Hexa Plant holds a medium-size plant on its base and has amazing features, such as an infrared sensor, a distance sensor, a 720p camera with night vision, as well as a built-in WiFi and USB ports.

Can it get any better?

Apparently, it can! The HEXA Plant can reportedly “play” with you whenever you touch its base. It can spin around and do a happy dance in the sunny areas of your home to remind you to optimize your vitamin D levels as well.

It crawls to the light and even spins around so that all leaves can enjoy it.

In a post on the company’s forum, Tianqi wrote:

“For billions of years, plants have never experienced movement of any kind, not even the simplest movement. Their whole lives, they stick to where they were born. Do they desire to break their own settings or have a tendency towards this? … With a robotic rover base, plants can experience mobility and interaction.”

The robot is actually just a modification to the standard HEXA of the company.

“My intent … is to inspire people to think about the relationship between human technology and natural limitation, and the boundaries between living beings and machine with robotics.

While at the time of building this, I built it as more of an installation art piece rather than a functional robot. But based on the interest I’m hearing, I see that people are interested in adding robotics into their homes with a product such as this.”

While it is not available for purchase yet, the original HEXA can be bought for  $949.

There’s A Jason Momoa Coloring Book To Ease Your Stress