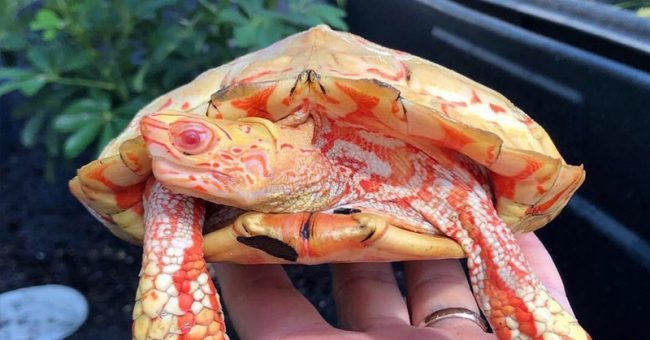 Nature is complex and innovative and has numerous mechanisms to just leave us open-mouthed. With its innumerate creations, Nature reminds us that we are nowhere near its intelligence, competency, creativity, and power.

Have you seen, or heard of, albino turtles before?

If you haven’t, you will be amazed to see these unique creatures, that many claim resemble mini dinosaurs, fiery dragons, and even fictional video game characters!

The Albino Rhinoclemmys pulcherrima, known as the Painted Wood Turtle, is one of the rarest turtles on the planet. It primarily lives on the west coast of Mexico and Central America, and it has bright red and yellow markings on the shell and head.

This turtle is omnivorous and its diet consists of grass, fruits, wildflowers, insects, worms, and fish.

These turtles usually live for more than twenty years, but their beauty also makes them prone to exploitation for the pet trade. Yet, they die within a year in captivity.

Albinism can happen in humans and animals, and it is a lack of pigmentation in the skin, eyes, skin, and sometimes hair. It is inherited from the parents since it is caused by the combination of recessive alleles from both parents.

The gene that leads to albinism prevents the normal production of melanin in the body, which is responsible for pigmentation. Yet, this condition is a bit different when occurring in turtles, lizards, and other reptiles, since they have one pigment remaining in their skin, and it makes them look yellow, orange, red, or pink.

Additionally, albino turtles have red eyes, so in a combination with the orange-tinged skin and shell, they are simply incredible!

However, no matter how attractive you may find it, albinism causes difficulties in both, people and animals. Albino animals are easier to be spotted by predators, and albino predatory animals often die of starvation since they cannot hunt their prey due to their inability for camouflage.

Yet, due to their hard shells that provide extra protection, albino turtles are luckier than other albino animals.

Albino animals also face problems with reproduction, as their peers see them as outcasts. They also have vision issues, while the ones that have melanin in their ears, face hearing difficulties as well.

Nevertheless, they look absolutely fabulous, do you agree?

TikTok Is A Pedophile Magnet And UnSafe For Kids, Warns Cyber Security

Pick A Day To Relax