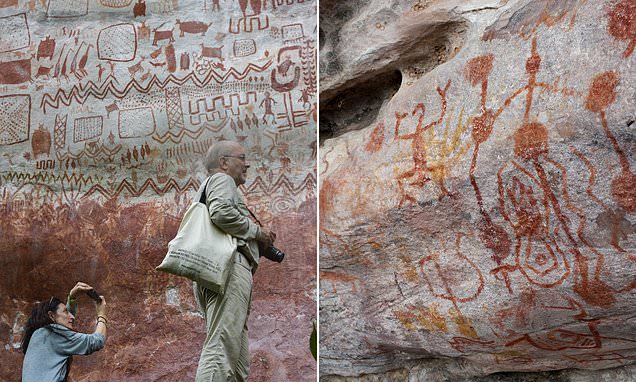 Last year, in the Amazonian rainforest, a team of archeologists has discovered an eight-mile wall of prehistoric rock art featuring animals and humans, estimated to have been created up to 12,500 years ago.

Wise people know that life is a long search for knowledge: no matter how much we think we know, the things we don’t know vastly outweigh the ones we do. Think of all the people who have inhabited our planet many millennia before writing emerged. We know almost nothing of what they have experienced.

This is why the role of science is so important- scientists try and unravel the vast mysteries of the universe. In the Amazonian rainforest, a team of British and Colombian archeologists has discovered an eight-mile wall of prehistoric rock art featuring animals and humans.

The artwork, created up to 12,500 years ago, has been named the ‘Sistine Chapel of the ancients’, and it was uncovered on cliff faces last year in the Chiribiquete National Park, Colombia.

The project was funded by the European Research Council.

Experts specified the date of the paintings according to the portrayal of extinct animals from the ice age, like the mastodon – which is a prehistoric relative of the elephant which hasn’t been seen in South America for at least 12,000 years.

Other extinct animals have been portrayed as well, such as a palaeolama -- an extinct member of the camel family, giant sloths, and ice age horses.

The artwork also contains human handprints, images of fish, turtles, lizards, and birds, and people dancing and holding hands. One figure wears a mask resembling a bird with a beak. The paintings vary in size.

Most tribes native to the Amazon are thought to have descended from the first Siberian wave of migrants who are believed to have crossed the Bering Land Bridge up to 17,000 years ago. 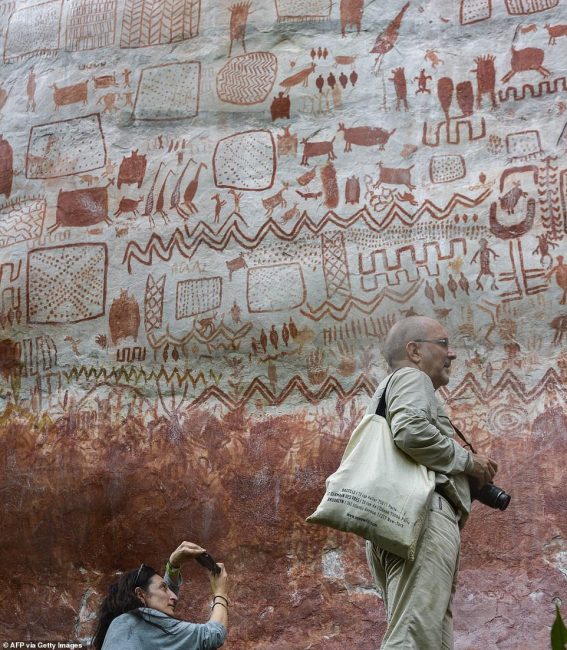 Snowfall was very light during the ice age, so the land bridge remained almost untouched. People from different areas could easily cross it and travel on either side, as it stretched for hundreds of kilometers into the continents.

The exact tribe who has created the paintings has not been specified, but experts believe that there have been two Amazon tribes living there for thousands of years -- the Yanomami and the Kayapo.

The first report of the Yanomami, who live between the borders of Brazil and Venezuela, was in 1759 when a chief of another tribe mentioned them to a Spanish explorer.

The Kayapo tribe is estimated to have a population of roughly 8,600. 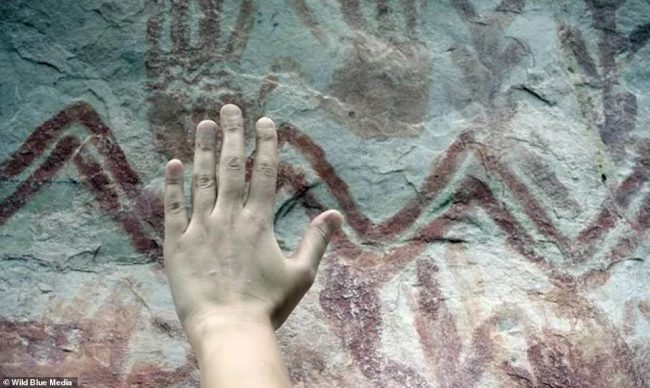 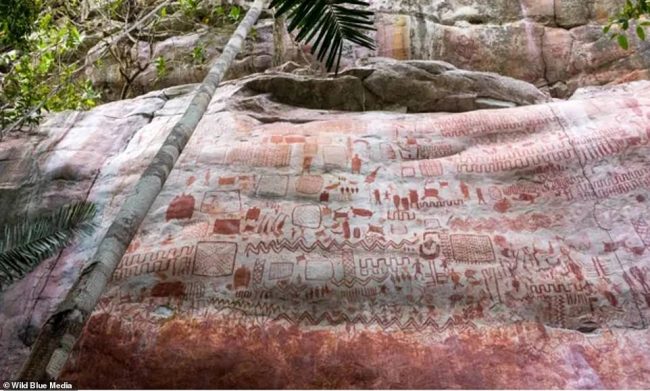 Tribes native to the Amazon didn’t keep written records until relatively recently. Moreover, almost all traces of their material culture has been destroyed due to the humid climate and acidic soil.

Therefore, until this discovery, everything we knew about the history of the area was a result of scant archaeological evidence like ceramics and arrow heads.

The site of the discovery is deep in the heart of Colombia, in the Serrania de la Lindosa, and it is thought that the ancient paintings are a creation of the first-ever humans to reach the Amazon. 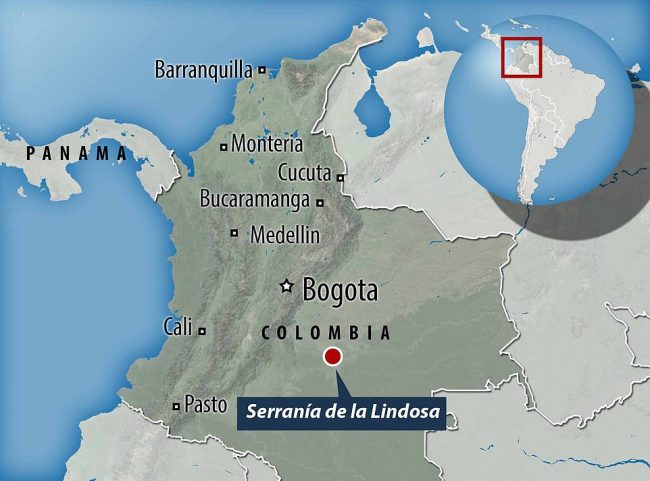 Even though the discovery has been made last year, it was kept a secret. Yet, this month, it will feature in a Channel 4 series Jungle Mystery: Lost Kingdoms of the Amazon. 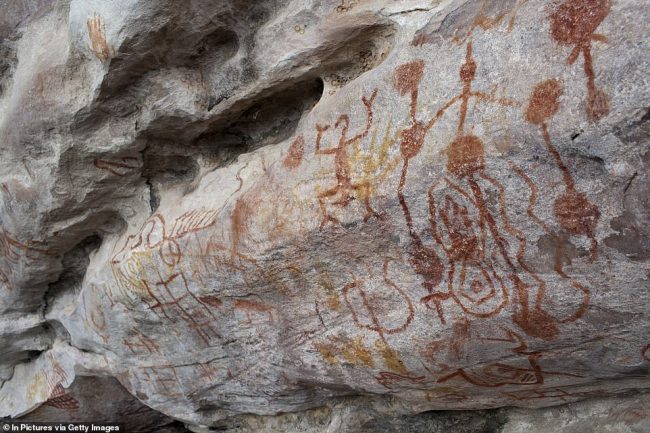 After driving for two hours, the team of researchers was forced to trek on foot for another four to reach the remote site.

Jose Iriarte, a professor of archaeology at Exeter University, who led the team, said:

“When you’re there, your emotions flow … We’re talking about several tens of thousands of paintings. It’s going to take generations to record them … Every turn you do, it’s a new wall of paintings.

We started seeing animals that are now extinct. The pictures are so natural and so well made that we have few doubts that you’re looking at a horse, for example. The ice-age horse had a wild, heavy face. It’s so detailed, we can even see the horse hair. It’s fascinating.” 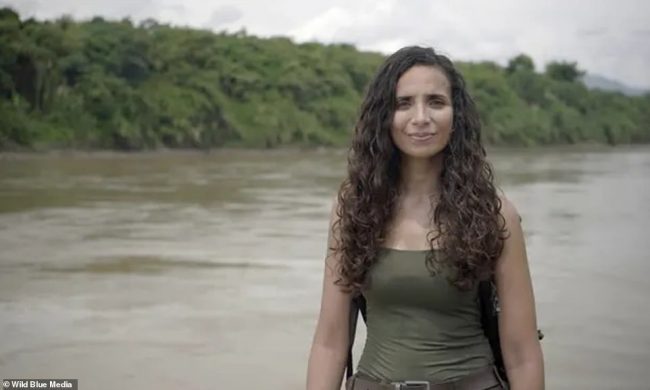 During their trek, the team of scientists encountered the deadliest viper in the Americas- the bushmaster. They carefully walked past it, knowing that they would probably have no time to make it to the hospital in case it attacked them.

After being entirely off-limits during Colombia’s five-decade-long raging civil war, the site of the wall paintings has been now unsealed. However, entering the area still requires careful negotiation.

Some of the paintings are extremely high up on relatively sheer rock faces, and this initially confused the explorers.

Yet, professor Iriarte believes that those ingenious people used wooden towers, depicted among the paintings, to reach those heights.

While it is not clear whether the paintings had a sacred purpose, he has noticed that many animals have been painted surrounded by humans with their arms raised -- seemingly in a pose of worship.

Observing that the imagery includes trees and hallucinogenic plants, he added:

“For Amazonian people, non-humans like animals and plants have souls, and they communicate and engage with people in cooperative or hostile ways through the rituals and shamanic practices that we see depicted in the rock art.”

The documentary’s presenter, Ella Al-Shamahi, an archaeologist and explorer, shared her excitement at seeing the “breathtaking” images created thousands of years ago. She claims it is fascinating to see the ancient paintings of the way the land looked like millennia ago.

She explained that many people don’t know that thousands of years ago, the Amazon was more “savannah-like”, much different than the rainforest we know now.

“One of the most fascinating things was seeing ice age megafauna because that’s a marker of time. I don’t think people realize that Amazon has shifted in the way it looks. It hasn’t always been this rainforest. When you look at a horse or mastodon in these paintings, of course, they weren’t going to live in a forest. They’re too big.

Iriarte believes there are many more paintings to be found in the area, and the team will again visit it and explore it once the pandemic is over.

Subway Worker Falls Asleep While Making Customer's Sandwich: 'I Can’t Imagine How Underslept She Is'