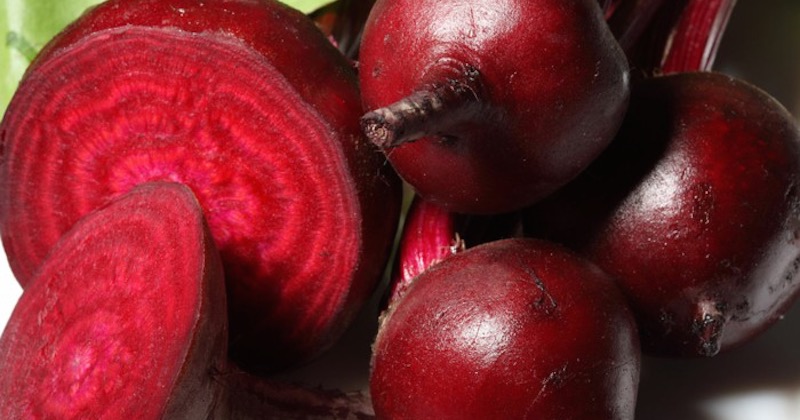 Beets are members of the same family as spinach and chard. Its leaves are high in chlorophyll and are bitter in taste.

According to BBC Good Food:

“Like many modern vegetables, beetroot was first cultivated by the Romans. By the 19th century, it held great commercial value when it was discovered that beets could be converted into sugar.

Today, the leading commercial producers include the USA, Russia, France, Poland, and Germany. Many classic beetroot recipes are associated with central and Eastern Europe including the famous beetroot soup known as borscht.

Beetroot’s earthy charm has resulted in its ubiquitous influence on fashionable menus and recipes. Its delicious but distinctive flavor and nutritional status have escalated it to the root you can’t beat!”

Beet greens and beetroot cleanse the blood, and a phytochemical in beet, called betacyanin, is responsible for the color of this vegetable and lowers homocysteine levels.

Beets are full of iron, calcium, copper, magnesium, phosphorus, and sodium, as well as vitamins A, B1, B2, B6, and C. Sweet beetroot is a rich source of iodine, manganese, choline, folate, organic sodium, potassium, fiber, and carbohydrates in the form of natural digestible sugars.

Beetroot is also abundant in betaine, and according to the World’s Healthiest Foods:

“[Betaine’s]… presence in our diet has been associated with lower levels of several inflammatory markers, including C reactive protein, interleukin-6, and tumor necrosis factor alpha. As a group, the anti-inflammatory molecules found in beets may eventually be shown to provide cardiovascular benefits in large-scale human studies, as well as anti-inflammatory benefits for other body systems.”

The addition of beets to your diet will improve health in numerous ways:

Dandruff:  Massage the scalp with a mixture of beet juice and vinegar to clear up dandruff.

Detoxification:  The choline in beet juice cleanses the liver.

Liver or bile:  Beets cleanse the liver and thus treat all kinds of toxicity or bile ailments, like jaundice, hepatitis, diarrhea, food poisoning, or vomiting.

Anemia:  Beets are rich in iron that regenerates and reactivates the red blood cells and supplies fresh oxygen to the body, while copper is an excellent blood builder.

Gastric ulcer:  To heal gastric ulcers, mix honey with beets juice and drink the mixture two or three times a week on an empty stomach.

Gallbladder and kidney ailments:  Beetroot juice is excellent in the treatment of kidney and gallbladder issues.

Gout:  Beets are of great help in case of gout as well.

Stamina and energy: beets will help you boost your energy levels and stamina if consumed before a sports activity.

Before cooking, remove the skin of the beetroot, and if preparing juice, to boost the absorption rate of nutrients, add a quarter slice of a lemon (with peel) to a medium-sized beetroot.

If you are a beginner, start with the juice of half a medium-sized beetroot once weekly, as it is very potent, and can even cause dizziness during the detoxification of the body. You should also drink plenty of water during such a treatment with beets.

Moreover, people with a history of oxalate-containing kidney stones should limit their consumption of beets.

Asparagus Is A Highly Alkaline Food For Scrubbing Out The Kidneys, Bladder And Protecting Liver Health