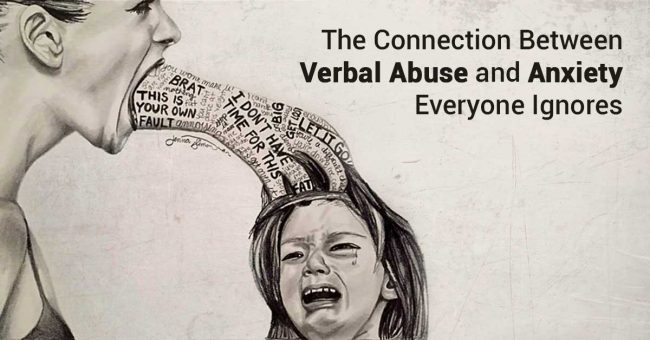 Chronic stress and trauma lead to various mental disorders, one of which is anxiety.

However, many people overlook the serious negative effects of mental abuse, but it is actually on the same level of harmfulness as physical abuse. People can suffer a lot due to being yelled at, insulted, and disrespected.

Scientists explain that cyberbullying and real-life verbal abuse are seriously dangerous, as they affect both hemispheres of the human brain, and lead to numerous health issues.

According to Sherri Gordon, a published author, and a bullying prevention expert:

“Because verbal abuse isn’t as clear-cut as other forms of abuse and bullying, like physical bullying and sexual bullying, it can be hard to identify. But that doesn’t make it any less real.

Typically, verbal abuse involves some sort of verbal interaction that causes a person emotional harm. For instance, when someone is being downright critical, acting out in anger, and using words to try to control another person, this is verbal abuse.

This, in turn, leaves a victim questioning who they are. In fact, it is not uncommon for a victim of verbal abuse to feel inadequate, stupid, and worthless. After all, they are being defined by a verbally abusive person.

If verbal abuse occurs in a dating relationship, it can be particularly confusing because the partner is likely not abusive all the time.

As a result, when the abuser is loving and gentle the victim can forget all the about the negative behavior. Ultimately, the victim ends up ignoring the pattern of verbal abuse or makes excuses for the behavior saying things like he is just stressed out or he is going through a tough time right now.”

Verbal abuse can lead to the following:

Verbal abuse can be manifested through various kinds of behaviors, and the following can be clear signs of it:

Abusers need to be in control of the situation, so they make you feel bad and spoil your good mood whenever possible since they feed when you are sad.

Name-calling is a way to manipulate others and harm the victim.

Abusers never apologize or enter a discussion about their behavior, as they believe they are never wrong.

Abusers blame other people for everything, in order to make them feel guilty and never good enough.

If done without consent and permission of the other, joking can cause harm to the person affected.

Abusers usually attack the hobbies, and interests of other people, making them feel worthless, and even end up lying.

Abusers usually disrespect others and do not appreciate anything other people do, making them feel useless and empty.

Abusers usually torment their victims behind closed doors, when no one can see them. Verbal abuse can happen at school, work, and at home, leading to severe trauma.

Abused people often live isolated and avoid socializing, in order to protect themselves. They feel anxious when with other people since they lack self-confidence. In case you notice this, do your best to help this person.

If you are a victim of verbal abuse, remember that healing takes time, but you should always trust your instincts. As soon as you recognize this behavior, you need to do something about it before it escalates, and the following tips will help you:

9 Easy Stretches to Release Lower Back and Hip Pain