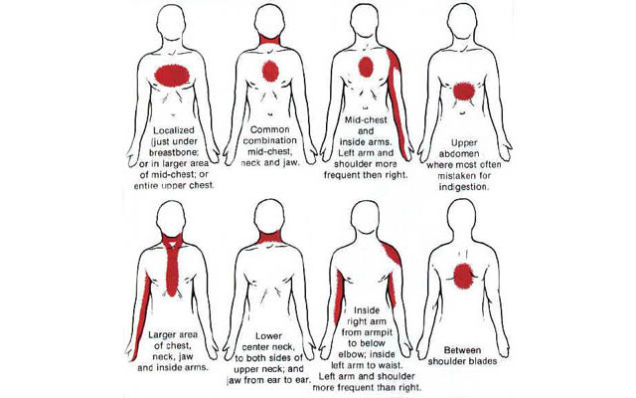 Heart attacks are one of the leading causes of death in both men and women in the United States. One of the biggest reasons why heart attacks are so deadly is not because of the severity of the attack; it’s because the signs and symptoms are often not known, which means that they are ignored and go untreated – and it’s when a heart attack goes untreated that it becomes so dangerous.
So, what are the signs of a heart attack? If you have the image of a person clutching his or her chest and falling down onto the ground, clear that out of your head.
While this could be a sign of a heart attack, more often than not, the symptoms are very different and much milder? So, what are the signs of a heart attack that you should be aware? Here are five big ones that you should absolutely be aware of:

If you ever experience any of the aforementioned symptoms, head to an emergency room right away. If it is a heart attack, the sooner you are treated, the better of you will be.
Sources:
http://www.newsmax.com/FastFeatures/Heart-Attack-Symptoms-Women-Health/2015/02/10/id/623963/
http://www.webmd.com/heart-disease/features/12-possible-heart-symptoms-never-to-ignore
http://www.webmd.boots.com/heart-disease/features/heart-attack-symptoms-never-ignore