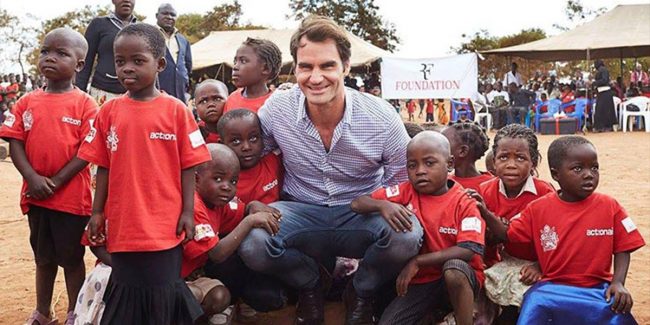 Roger Federer has won 20 Grand Slam singles titles, which is the most in history by a male player and has held the world’s top spot in the ATP rankings for a record total of 310 weeks.

Moreover, he is also the only person to have won the BBC Overseas Sports Personality of the Year award four times.

Among the leading sports icons, Federer with an annual brand value of $93.4 million, is the fifth highest-earning sports star in the Forbes’ Top 100 athletes list for 2019.

Yet, despite his incredibly successful career, the Swiss tennis player always finds time to involve in philanthropic efforts.

Since its formation in 2004, his foundation has been primarily focused on improving education for children, especially in places where they have extremely limited access. One might expect a foundation that bears a famous tennis player’s name to be centered around the sport, but this one actually focuses on education.

Specifically, the Roger Federer Foundation works to provide increased access to early education for children in six low-income countries including Botswana, Malawi, and Zambia. When Federer founded his non-profit, he focused on projects in South Africa, which is his mother’s home country.

In the past fifteen years, he has opened schools all around the Globe. The foundation is currently supporting over 3,09,000 children – primarily among the underprivileged African society.

The foundation has built more than 50 preschools in Malawi, in Southern Africa, and is supporting over 97,000 kids in Malawi alone.

According to the foundation’s mission statement:

“We thus aim to give children the best start on their educational path through life by establishing and further developing existing early educational services in a sustainable way”.

During one of his visits in Malawi, he said:

“I’m so happy and emotional that I can see a preschool of this quality here–it’s quite extraordinary. The community is so committed to helping the kids, it’s so important (as) the foundation for learning.”

In 2015, the Roger Federer Foundation declared that they hope to feed and teach one million kids by 2018. This sounded impossible at the time, but they made it happen.

“It took a lot of work and determination to achieve this amazing thing. There was no other possibility than achieving this goal because Roger always achieves his goals. There are one million children who benefit from the major quality of education in the school, pre-school, kindergarten.

One million children have now a better chance to make their way in life, to get a job, to exit from poverty… Roger believes in the empowerment of the people and their potential. That’s a fundamental value in our every-day work. We strongly believe early education is one of the most powerful weapons to empower children exiting from poverty.

It’s actually proven that education makes people better citizen, be more prepared when it comes to dealing with issues, and they have more instruments to manage their life.”

“I believe in the power of people. They might only need some initial empowerment. We know that a good education empowers children by allowing them to take their future into their own hands and play an active part in shaping it. And we trust in the best will of parents that they want to ensure the best possible opportunities for their children.”

The Gluten Free Rice That Detoxes Your Body & Improves Digestion

15 Interesting Facts About Joaquin Phoenix You May Not Know