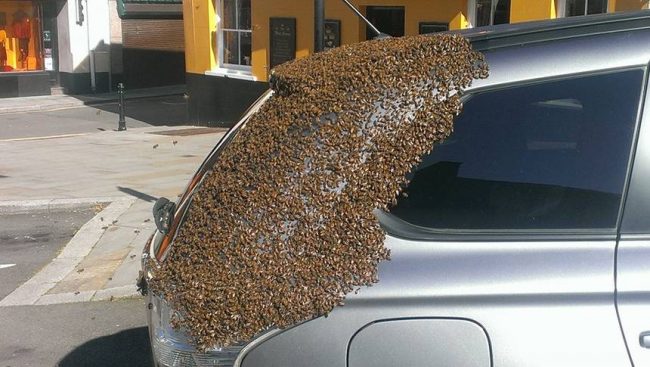 Bees have a specific type of respect for their queen, and Carol Howarth, 68, knows it best. She parked her Mitsubishi in the town of the Haverfordwest, Wales, and went to buy her groceries.

A cloud of bees approached her car, and didn’t left the spot. Tom Moses, a local, was concerned about the bees and the possible solution to the problem, and decided to call a team of beekeepers.

According to him, the view was spectacular. He was driving in his car, and spotted the brown splodge that came out of nowhere. People were slowing down just to take pictures. Moses was really concerned because the bees were right outside a pub. He didn’t want people to get hurt, and he was worried about the safety of the bees, too.

The problem was solved before Carol finished her errands. Believe it or not, the bees followed her. Carol noticed the same cloud of bees the next day, and had to call the beekeepers again.

They said the queen bee was attracted to something sweet in the car, and got inside a gap on the boot’s wiper blade or the hinge, as explained by Roger Burns of Pembrokershire Beekeepers. Around 20,000 bees followed Carol’s car and were concentrated on the boot of the car.

The beekeepers managed to reunite the queen bee and her bees.

This was the strangest bee-related thing Burns has seen in thirty years of beekeeping. He knows that bees follow their queen, but he was surprised to see that they actually followed her for two days. Nature is amazing!