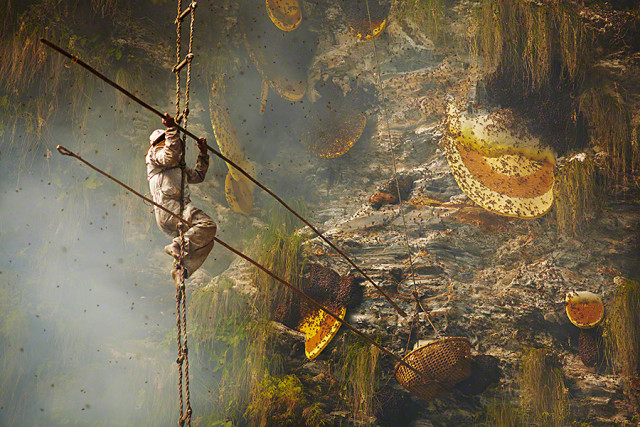 Semiyearly, the brave Gurung people from Central Nepal accept nature’s challenge and collect honey from the world’s largest beehives, based on the highest parts of the Himalayan cliffs. Andrew Newey, travel photographer, captured this magnificient and challenging ancient art during his two-week stay. However, the number of honey hunters reduces every year, and this art could actually disappear in a short period of time.

“For hundreds of years, the skills required to perform this dangerous task have been passed down through the generations” wrote Newey, “but now both the bees and traditional honey hunters are in short supply.”

The only things honey hunters use are a handmade rope ladders and tangos -- long sticks. The Gurung people also use smoke to drive thousands of angry and tempered Apis laboriosa -- world’s largest bee.

The massive beehives are usually located on steep cliffs facing south-west, in order to avoid any possible predators and to increase the exposure to direct sunlight.

In autumn, the honey hunt lasts for three days, preceded by a ceremony which is supposed to soothe the cliff gods.

When collected, the honey is lowered to the helpers waiting below the cliffs.

How To Eat Right For Your Blood Type

Prepare The Most Delicious Homemade Strawberry And Banana Ice Cream