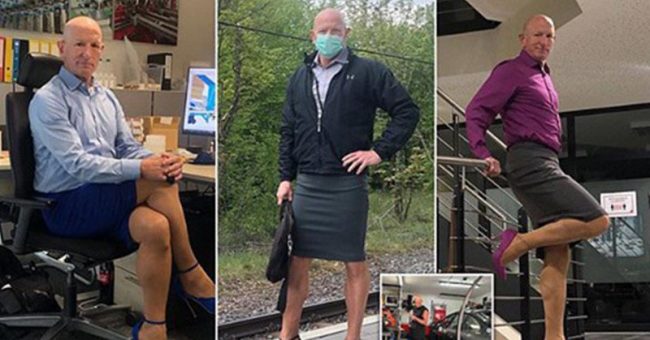 Although they are sometimes very useful, labels are not something that we can all agree on. We are all very different, and we see the world from a different perspective.

This emphasizes the need to redefine things, or to ditch all definitions whatsoever! One businessman claims that clothes have no gender, and he proves it- by bringing the business suit to a whole new level!

Mark Bryan, a 61-year-old robotics engineer from the USA, is living in Germany. He is a straight man, happily married, with three children. Yet, when he goes to work, he loves to wear pencil skirts and eight inched heels. He pairs them with the typical business button-up for men.

“Clothes have no gender, but I do refer to my shirts as men’s; just to be clear, I do not wear blouses. Even if a say I wear a men’s shirt and a women’s skirt and heels, it’s all non-gender clothes to me.”

To promote his outfits, he has been posting photos of himself on Instagram in the last 4 years.

Decided to wear some boots today and a longer skirt. It’s not cold today, but very cool. Worked at home this morning and now going into the office to meet with my 2nd shift group. I am just a normal, happily married, straight guy that loves Porsche’s, beautiful women, and likes to incorporate a skirt and heels into his daily wardrobe. Clothes and shoes should have no gender. #meninskirts #markinhighheels #clotheshavenogender #maninheels #maninhighheels #socialdistancing #maninskirt #skirtsformen #heelsformen

“I am just a straight, happily married guy that loves Porsches, beautiful women, and incorporating high heels and skirts into my daily wardrobe.”

While he adds that he has always respected the power that women who wear tight skirts and heels in the workplace display, he explains that his style is just because he can!

As he says, he likes to mix the genders, so he prefers “a ‘masculine’ look above the waist and a non-gendered look below the waist.”

The reactions have been mixed, but he doesn’t let other people’s opinions affect him. He says it all started at college with his then-girlfriend. She wanted Bryan to be dressed in a skirt and heels while they were dancing.

She helped Bryan to develop a new perception of the clothes’ gender, and he is doing this ever since. Brain says that in most cases, it’s men who have a problem with his outfit in public. At his office, his coworkers are shocked and confused by his appearance.

Men often ask him about his sexual orientation, and while he usually tells them that it’s not their business, he sometimes explains that he is straight.

Yesterday on my way to work. I had a meeting with a customer after lunch so couldn’t go without hose. 😢 Getting warm here in Germany. Half day at home and half day in office. Day 58 of somewhat working at home. Stay home and be safe everyone! I am just a normal,happily married, straight guy that loves Porsche’s, beautiful women, and likes to incorporate a skirt and heels into his daily wardrobe. Clothes and shoes should have no gender. #meninskirts #markinhighheels #clotheshavenogender #maninheels #maninhighheels #socialdistancing #maninskirt #skirtsformen #heelsformen #lostink #lostinkshoes #lostinkgirls @lostink.official

Since he started wearing skirts and heels, Brian has been married three times.

One day, he explained to his son and two daughters why he was dressing the way he did. He said he liked wearing skirts and heels, so it was not sexual, and they should worry about him being gay.

His wife and his children support him. He is very lucky that they understand him and want him to be happy. His family also shares the opinion that clothes have no gender.

Brian initially wore heels and pants, and the style slowly evolved into wearing skirts and heels at the office over time. The first time he wore a skirt, he felt nervous. Afterward, he realized that people rarely pay attention to other people’s outfits.

From then on, he wears his outfit everywhere he can, when he goes shopping, in the park, on the train, and even when he’s fixing up cars! He gets helps from his wife of 11 years when he chooses his outfits, and his daughter often asks to borrow his shoes, although they are too big.

Brian has chosen to continue the practice of wearing smart women’s business attire even during the pandemic when most of us have decided to dress casually while working from home.

Technically speaking, this should not be a problem. No one should be judged or ridiculed by the clothes they wear. To Bryan and people like him, the only important thing is to be happy, even if that means defying people’s opinions about clothes and gender.

Day 14 of Homeoffice. Getting back in the groove after a 4 day weekend. It was hard practicing social distancing during the Easter holidays especially with family. Stay safe everyone! I am just a normal happily married straight guy that loves Porsche’s, beautiful women, and likes to incorporate a skirt and heels into his daily wardrobe. Clothes and shoes should have no gender. #meninskirts #markinhighheels #clotheshavenogender #socialdistancing #maninheels #maninhighheels #maninskirt

Strangely enough, there are many people like Bryan who choose to live an unhappy life, just because of the opinion of society.

Despite his claims that he is straight, Bryan is spreading awareness for the LGBTQ + community. A variety of queer people, especially the transgender community, struggle with the everyday dilemma on what is and what isn’t acceptable to wear in public.

Not many heterosexual people offer their help in this struggle, and if they did, it could dramatically improve things.

Woman, 22, Spends Thousands On Lip Injections Aspiring To Have The World's Biggest Lips