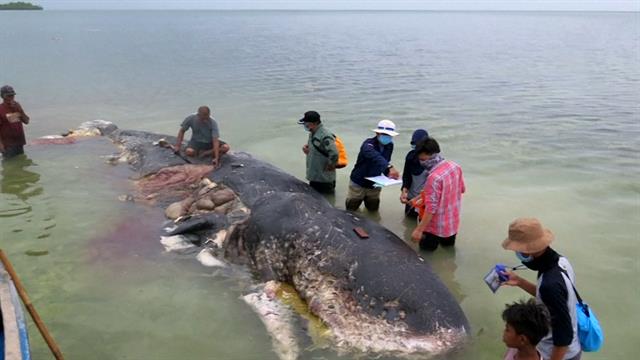 In 2016, 29 sperm whales were found stranded on shores around the North Sea, in Germany, France, the U.K., and The Netherlands.

A press release from Wadden Sea National Park in Schleswig-Holstein reported that the stomachs of four of the thirteen whales that had stranded in Schleswig-Holstein in Germany contained large amounts of plastic garbage, including a 13-meter-long fishing net, and a 70- cm long plastic cover from the engine compartment of a car, as well as the sharp edges of a plastic bucket.

Even though plastic waste was not the reason for the death of the animals, it reflects the situation in the open sea. Veterinarians and biologists believe that it leads to major health problems in these affected animals.

Robert Habeck, environment minister for the state of Schleswig-Holstein, said that these findings reflect the effects of our plastic-oriented society. Animals consume plastic and plastic waste, which causes them to suffer, and in the worst case, to starve with their stomachs full.

Nicola Hodgkins of Whale and Dolphin Conservation added that the large pieces will lead to obvious problems and block the gut, but the smaller bits will also cause a more chronic problem for all species of cetacean.

This case is unfortunately not the first, as in 2011, a young whale was found floating dead off the Greek island of Mykonos. When they saw his distended stomach, biologists thought it swallowed a giant squid, but what they found were 100 plastic bags and other pieces of debris.

According to National Geographic, the sperm whales died of heart failure, while they were mistakenly swimming into the North Sea, searching for squid, and their internal organs collapsed since they were unable to support their body weight in the shallow water.

Male sperm whales normally migrate from their tropical or subtropical breeding grounds to colder waters at higher latitudes. They are among the deepest diving animals in the cetacean family, known to plummet as far as 3,280 feet (1,000 meters) in search of their favorite food. The beached whales were all young males between the ages of 10 and 15.

According to Danny Groves, a spokesperson for the nonprofit Whale and Dolphin Conservation (WDC), it is believed that these giant marine animals may have got lost and entered the North Sea, where the sea floor is not deep enough, so they became disorientated and died.

However, the discovery of pollution in their stomach is horrible and saddening. People continue throwing plastic on land, and 80% of it ends up in the oceans and is often consumed by swirls and wildlife. Despite ocean pollution, whales also face threats from ship collisions and fishing nets.

This article was initially published with a headline: ” Two Whales Found Dead In Germany, Stomachs Full Of Plastic And Car Parts”.

Yet, it contained certain inaccuracies, in terms of the number of whales, the amount of plastic found in them, their location, and the cause of their death.

Therefore, some data was eliminated, and some was corrected to clarify the content of the article, so the new, updated version contains reliable information only.