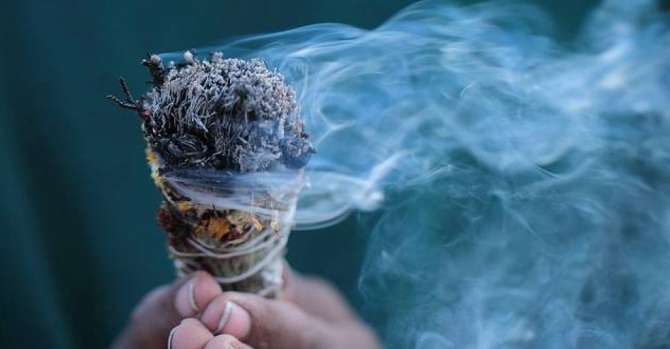 In ancient times, people had a cleansing method which included a practice of smudging specific herbal bundles that were burned with the aim to eliminate the emotional and spiritual negativity and restore the ease and balance of a person or a group.

Numerous early civilizations used the white smoke therapy as a way to gain numerous benefits and restore health and wellbeing Within the last century Western civilizations have begun to accept this therapy as well.

The efficacy of smudging has been questioned and even ridiculed by numerous skeptics, but still, modern science provides evidence that smudging can actually provide the benefits it is believed to give.

Namely, a review under the title “Medicinal smokes”, published in the Journal of Ethnopharmacology, in 2006, examined herbal and non-herbal remedies consisting of one or more ingredients administered in the form of smoke, and investigated remedies from over 50 countries across 5 continents.

However, their findings suggested that there is an overlap worldwide. In addition to the healthy spiritual state, all these cultures use medicinal smoke as a therapy of the dermatological, neurological, or pulmonary organ systems.

Scientists concluded that smoke needs to be examined as a drug delivery system by the conventional medicine. According to the report, “the advantages of smoke-based remedies are rapid delivery to the brain, more efficient absorption by the body and lower costs of production.”

The same journal published another brilliant review entitled as “Medicinal smoke reduces airborne bacteria” a year later, in which researchers have provided empirical evidence that the smudging practice may be one of the most powerful antiseptic techniques known to man. They claimed:

“We have observed that 1 hour treatment of medicinal smoke emanated by burning wood and a mixture of odoriferous and medicinal herbs (havan sámagri=material used in oblation to fire all over India), on aerial bacterial population caused over 94% reduction of bacterial counts by 60 min and the ability of the smoke to purify or disinfect the air and to make the environment cleaner was maintained up to 24 hours in the closed room.

We have demonstrated that using medicinal smoke it is possible to completely eliminate diverse plant and human pathogenic bacteria of the air within confined space.”

Therefore, an hour after the smudging of the smoke, the person experiences a 94% reduction of aerial bacteria, and the room is decontaminated after 24hours. Moreover, some pathogens were not detected in an open room even after a whole month.

Considering the fact that most urban air includes more than 1,800 different kinds of bacteria, the smudging technique, if practiced occasionally, may significantly decrease and prevent the contraction of various illnesses caused by the poor air-quality.

Unfortunately, this effective method has not been used in the Western society long even though it is a common traditional practice in some parts of the world.

Hence, the evidence provided by scientific research explains the reason why this practice has been highly valued and frequently used as a remedy by our ancestors, and why it has been believed to cleanse the ‘negative energies’ and ‘evil spirits’.

Yet, the empirical evidence provided does not exclude the power of the ingredients and their aroma-therapeutic features to enhance the wellbeing and mood of the person.

Furthermore, numerous studies have shown that burning herbs may have powerful antiproliferative effects, which again prove that the therapy with smoke may have various applications in the conventional medicine.

5 Effective Exercises That Will Build Up Your Glutes, Improve Your Posture And Burn Fat