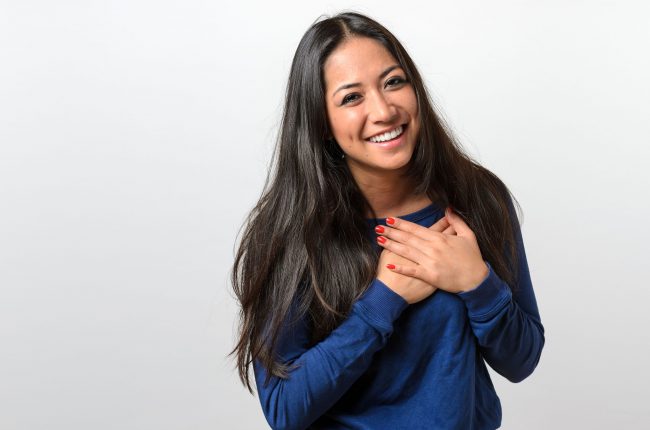 We live in a world where the material possessions are believed to be the key to happiness, people forget to be grateful for what they have and often complain about the things they lack in life.

This is a matter of perspective, and many people fail to find happiness in life just because they always want more. Yet, the fact is that happiness is not a result of external factors, but it comes from inside of us.

Gratitude is one of the best ways to take care of your body and mind apparently. Kindness lifts our spirits and warms our hearts, heals us, and helps us fight off various illnesses. One can reap the benefits of gratitude in various ways, by keeping a gratitude journal, praying, meditating or simply expressing his feelings.

A 2009 National Institutes of Health (NIH) study found that our hypothalamus is activated when we feel gratitude, or display acts of kindness, and this brain part regulates numerous bodily functions including our appetite, sleep, temperature, metabolism, and growth.

Gratitude is also addictive since it actually increases our dopamine levels in the brain, a chemical released by the brain as a way to reward us by providing a natural high. As the feeling is so good, we are motivated to feel it again and start expressing gratitude more often.

Numerous studies have shown that people who count their blessings are far happier and less prone to depression.  Researchers at the University of California, Berkeley, conducted a study which involved about 300 people with mental health difficulties, including anxiety and depression.

Participants were divided into three groups, and all of them received counseling services. Yet, the first group also wrote one letter of gratitude to another person every week for three weeks, whereas the second group was asked to write their deepest thoughts and feelings about negative experiences. The third group was not given any writing assignment.

Results showed that people from the first group had drastically better mental health after 12 weeks compared to the other groups. This study showed that gratitude writing can be beneficial not just for healthy individuals, but also for the ones suffering from mental health concerns.

Participants were divided into three groups, and they were asked to keep a short journal. One group wrote about five things they were grateful for from the past week, another group recorded daily troubles from the past week that displeased them, and the neutral group was asked to list five events or circumstances that affected them, positively or negatively.

After 10 weeks, the first group felt much better than the others, and participants were a full 25 percent happier than the troubled group, complained much less, and exercised more.

Another 2003 study published in the Journal of Personality and Social Psychology showed that gratitude was a major contributor to resilience following the terrorist attacks on September 11. Apparently, gratitude even during the worst times—fosters resilience.

Berkeley researchers explain the psychological benefits of gratitude by providing the four insights:

They used an fMRI scanner to measure brain activity while people from each group did a “pay it forward” task.  During the task, the participants were given money by a “nice person”, who asked them to pass on the money to someone if they felt grateful.

They also filled in questionnaires to rate the extent of gratitude they felt toward the person giving them the money, to express their feeling when they had to pay it forward, as well as how guilty they thought they would feel if they didn’t help.

The aim was to make a distinction between actions motivated by gratitude and actions driven by other motivations such as obligation, guilt, or what other people think.

Gratitude cannot be faked, as its benefits come only if you really feel it.

Results showed that when people felt more grateful, their brain activity was distinct from brain activity related to guilt and the desire to help a cause. Also, people who are generally more grateful gave more money to a cause, and they showed greater neural sensitivity in the medial prefrontal cortex, a brain area linked to learning and decision making.

Moreover, they found that expressing gratitude has lasting effects on the brain, as three months afterward, the gratitude letter writers showed greater activation in the medial prefrontal cortex when they experienced gratitude in the fMRI scanner.

The benefits of gratitude were also confirmed by a 2007 study, which involved patients with hypertension who were made to count their blessings once a week. Researchers found that their systolic blood pressure was drastically decreased afterward. They also found that writing in a gratitude journal (often) can lower blood pressure by 10%.

A different research study on gratitude (by McCraty and Colleagues in 1998) provided impressive results as well. Namely, subjects were made to cultivate appreciation, and 23 percent showed a decrease in cortisol—the most prominent stress hormone, and what’s more, 80% of participants showed changes in heart rate variability; a direct result of reduced stress levels.

Researchers believe that these signals to the brain might be sent by the heart. The work of a group of prestigious and internationally recognized leaders in physics, biophysics, astrophysics, education, mathematics, engineering, cardiology, biofeedback, and psychology at the Institute of HeartMath showed that when one feels really positive emotions like gratitude or love, the heart beats out a different message, which determines the signals sent to the brain.

Gratitude reduces a multitude of toxic emotions, such as regret, envy, resentment, and frustration, and the numerous studies conducted by Robert Emmons, a leading gratitude researcher, show that gratitude leads to well-being, increases happiness and reduces depression.

Not only that but because the heart beats out the largest electromagnetic field produced in the body, the Institute has been able to gather a significant amount of data.

Rolin McCratey, Ph.D., and Director of Research at HeartMath explains that as emotional information is coded into these fields, we can change it by learning to shift emotions, and thus impact those around us. The heart sends more singles to the brain, and it affects its function.

The different patterns of heart activity have distinct effects on cognitive and emotional function.

The energy of every single one of us affects the collective field environment, so we all need to take personal responsibility for our energies and become more conscious of the thoughts, feelings, and attitudes.

This was proven by numerous studies. In the 1980s, during the Israel-Lebanon war, two Harvard University professors organized groups of experienced meditators in Jerusalem, Yugoslavia and the United States and asked them to focus their attention on the area of conflict at various intervals over 27 months.

They found that the levels of violence in Lebanon dropped between 40 and 80 percent each time a meditating group was in place. Also, the average number of people killed daily dropped from 12 to 3, and war-related injuries decreased by 70 percent.

Moreover, in 1999, statistics professor Jessica Utts at UC Irvine published a paper that confirmed that parapsychological experiments have provided much stronger results than those showing a daily dose of aspirin helps prevent heart attacks.

Yet, these findings are still heavily ignored and labeled as pseudoscience. What numerous scientists have confirmed is that our emotions associated with consciousness can transform our inner world, as well as the physical/material world around us.

Therefore, if we focus on positivity and express gratitude, empathy, and compassion, we can literally change the world.

Dutch Company Reveals An Electric Car That Charges Itself With Sunlight