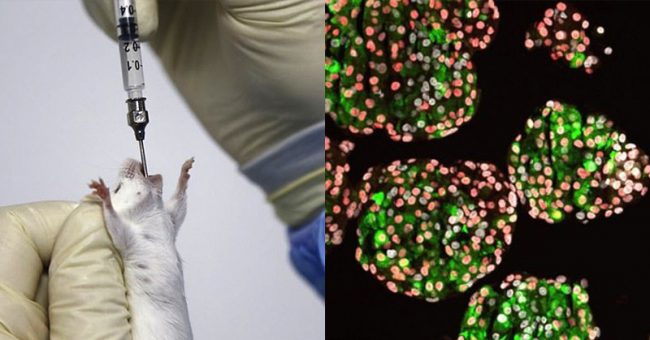 More than 420 million people around the world suffer from diabetes. This disease occurs when the levels of blood glucose, the main source of energy, are too elevated and cause numerous health problems over time.

It is the seventh leading cause of death in America and costs more than three hundred billion dollars per year.

Recently, scientists at the Washington University School of Medicine in St. Louis stated that they have successfully cured diabetes in mice using human stem cells.

Their findings were published in the February 24 edition of the online journal Nature Biotechnology.

Researchers converted stem cells into insulin-producing cells and infused them in mice, which proved to control their blood sugar levels.

“These mice had very severe diabetes with blood sugar readings of more than 500 milligrams per deciliter of blood — levels that could be fatal for a person — and when we gave the mice the insulin-secreting cells, within two weeks their blood glucose levels had returned to normal and stayed that way for many months. “

He added that the transformation of human cells into insulin-producing beta cells creates other, undesirable cells, that decrease the number of therapeutically useful cells.

About a billion beta cells are needed to cure a person of diabetes. However, he goes on to explain that in case “ a quarter of the cells you make are actually liver cells or other pancreas cells, instead of needing a billion cells, you’ll need 1.25 billion cells”. In this way, the chances that the treatment of diabetes will be successful drop by 25%.

Yet, this team used a new approach that targets the cytoskeleton of the hPSC cell, and the “scaffolding” is what gives the cell structure and mechanical support, allowing it to move, divide, and multiply.”

In this way, they create less irrelevant cells, and thus easily direct the hPSC cells’ transformation into pancreatic cells.

In only two weeks, the blood sugar levels of the treated mice were returned to normal, and remained that way for at least nine months, “functionally curing” them.

What’s more, researchers discovered that the cells used could come from multiple different sources, which opens up more abilities of the method.

Yet, while these results are highly promising, the treatment won’t be available soon.

Researchers need to test it in larger animals, for longer periods of time, and in case it is effective, they should develop a way to automate the process, as they will need to produce billions of cells to treat the millions of type 1 diabetes patients around the world.

Let’s just hope that Millman and his team will eventually provide the life-changing cure the whole world prays for.

Currently, there is no cure for diabetes, but in most cases, patients can control it by a combination of a healthy diet or a special meal plan, physical activity, a healthy weight, and regular checkups.

Some diabetics need medication too, and if prescribed by a doctor or nurse practitioner, this treatment is a crucial part of the diabetes management plan.