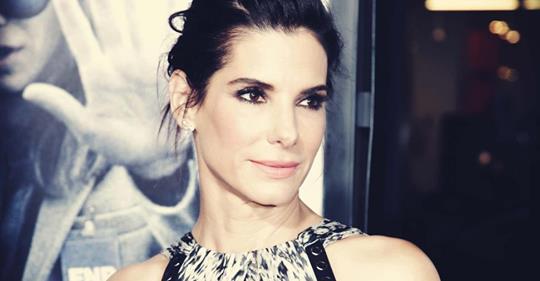 Every generation should be led by people who realize that by offering a hand and making a single step forward, we can save humanity and improve the world. While we cannot change the world all on our own, if we join our efforts, we can do miracles.

Sandra Bullock is one of those determined to do what they can and help others in a completely selfless way. She has been appreciated and loved throughout her entire career, but her secret life of philanthropy will surely charm you even more.

Despite her amazing personality and big heart, most people don’t know that the Oscar winner and mega-watt superstar has a long history of giving big donations to people and causes in need.

Being a great altruist, generous and humane, without seeking any attention for her charitable work, the modest star has given a great sum of money to help out after a tragedy strikes.

She donated $100,000 to The Humane Society of Ventura County, California in November last year, and the HSVC wrote they were ‘deeply humbled’ by the donation as it will help them provide 24/7 care for animals from the fires. Besides, they revealed that she has reached out to other nonprofit organizations both during this incident and in the past, but the smaller donations were not widely publicized.

That same month, this amazing human being also donated the whopping sum of $400,000 to the Red Cross, aiming the alleviate the destruction from these fires, and added that in such situations, we are all family, whether it be human, furry or feathered.”

The ‘Miss Congeniality’ star has chipped into multiple organizations every time there’s been a humanitarian crisis without much fanfare.

In January 2010, The Blind Side star joined a few other celebrities to help the victims of the devastating Haiti earthquake and donated $1 million to Doctors Without Borders’ emergency operation in Port-au-Prince to help to rebuild the impoverished country.

The mother of two did the same in 2005, following Hurricane Katrina in New Orleans. Additionally, she then ‘adopted’ a school named Warren Easton Charter High School and donated $25,000 to completely rebuild it.

Sandra Bullock also donated $1 million to the Red Cross after the Sept. 11 attacks in 2001.

Her donation of $1,000,000 to the American Red Cross following Hurricane Harvey helped those affected by the devastating flooding throughout the Texas gulf coast.

As noted by E! News, Bullock doesn’t do it for attention, which is why she’s usually quiet about it, and in a statement, the actress says “we have to take care of one another” and that she’s “just grateful” she can do it.

While setting an excellent example for us all, Bullock encourages others to do whatever they can and help those in need, as we are all in this together.

15 Dog Breeds That Will Be Your Friend The Longest