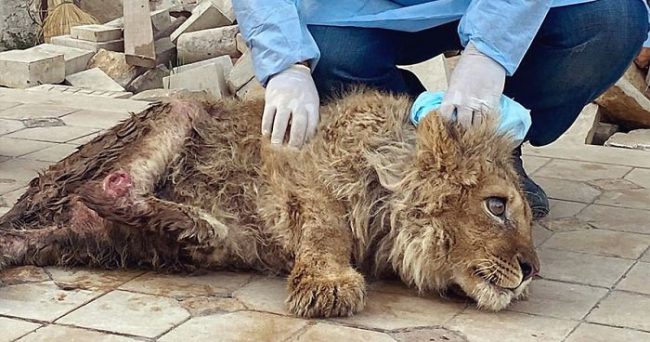 Animal rights activists and rescue organizations work hard to raise awareness of the importance of the health and safety of animals, but unfortunately, there is still a long way to go.

They are often subjected to human cruelty, and tourism has unfortunately generated a significant amount of animal suffering.

Last summer, a Russian photographer took a baby lion cub from his mother when he was only a few months old,  to use him to pose with tourists on Russian beaches.

When the cub was a bit older, he even broke his hind legs to prevent it from getting away from them! It was reported that the lion, Simba, became ill and was ‘tortured and beaten’ by the photographer.

His spine was severely damaged, and he was close to death when he was dumped in a cold and dirty old barn in the Russian region of Dagestan.

“He was practically not fed, and for some reason, in the frost water was constantly poured over him. This was a real hell.’’

When rescued, Simba was transported to specialist vet Karen Dallakyan, from Chelyabinsk, who rescues hundreds of animals from abuse and cruelty, heals their injuries, and provides them with shelter, food, and love.

He was shocked by the condition of the cub and explained that Simba had suffered ‘an ocean of pain from humans’, adding:

‘’Evil photographers break bones like this so that wild predators cannot escape and behave calmly for pictures [with tourists].’’

After the surgery, and months of rehabilitation, Simba was able to walk again, but he is permanently deformed. The cub also suffered from pressure sores, intestinal obstruction, and atrophy of the muscles of the hind limbs.

During the lockdown, Dallakyan had a video conference with ecologists and President Putin, and explained the horrible event, adding that ‘‘we do not see any criminal case opened.’’

The photographer who used the cub in Sochi last summer had denied torturing him and claimed that he sold him to new owners.

Almost a year after being rescued, Simba has almost completely recovered.

Vet Dallakyan considers the gradual recovery of the cub a ‘miracle’.

Nowadays, Simba no longer lives in fear. He learned to walk and play with toys, and the love and care he daily receives will eventually turn him into a normal young cub.

Incredible Video Shows Dog And Dolphin Playing Together At The Beach