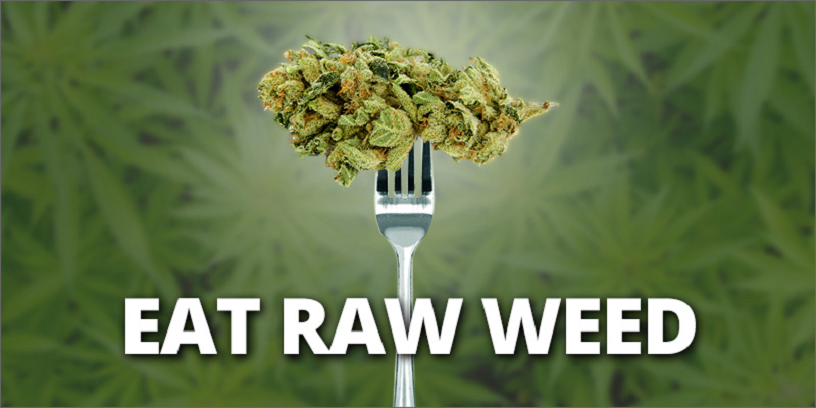 Cannabis is commonly used all around the world, primarily smoked. However, a recent research has shown that the consumption of raw cannabis can provide impressive health benefits.

It is definitely among the superfoods, as it includes more than 400 chemical compounds containing essential oils, acids, and vitamins. It is rich in cannabinoid acids which are vital for the proper cell function.

So far, the two most commonly studied cannabinoid acids are THCa and CBDa, which if heated in the case of cooking, heating or vaping cannabis, break down in various chemicals which become degraded into psychoactive THC and cannabinoid CBD.

This process depicts the breaking down of acids into an active form, and is known decarboxylation, or “decarbing.”.

Both the active THC and CBD offer their own health benefits, but the human body can only use a specific amount of them. As explained by Dr. Courtney:

“We have a series of cannabis strains called ACDC. ‘AC’ stands for alternative cannabinoid, which is the CBD acid molecule, which has come into focus lately as being very important as an anti-inflammatory.

If the cannabis is consumed raw, the body is able to process much more THCa and CBDa, and through the metabolism, it can convert these acids into essential nutrients.

Studies have related cannabinoid acids with the prevention of chronic diseases. Endocannabinoid deficiencies thought to be associated with illnesses including:

According to Dr. Courtney, bigger doses of raw CBDa and THCa are significantly more effective in their raw form to the effect of:

Cannabis is high in essential amino acids, which are extremely important as they support the proper function of cells, transport nutrients around the body, and repair damaged tissues. Since out body cannot produce them, we need to enter them through dietary sources.

CBD was patented by the US. government in 2013. As it was found that the cannabinoid has impressive antioxidant and neuroprotective properties.

These antioxidants preventing cell damage, and thus prevent diseases and illnesses. Research has shown that CBD is much more potent antioxidant than both vitamins C and E.

The consumption of raw cannabis provides you an opportunity to take it in high amounts, and thus easily get numerous antioxidants.

Dr. Courtney advised the consumption of raw cannabis in the form of juices, or smoothies, mixed with other vegetables like parsley or cilantro.

We also suggest the following recipes in order to enjoy the countless benefits of raw cannabis:

16 Signs Which Are Warning you that your Liver is Overloaded With Toxins That Make You Fat!

How To Grow Your Own Blueberries