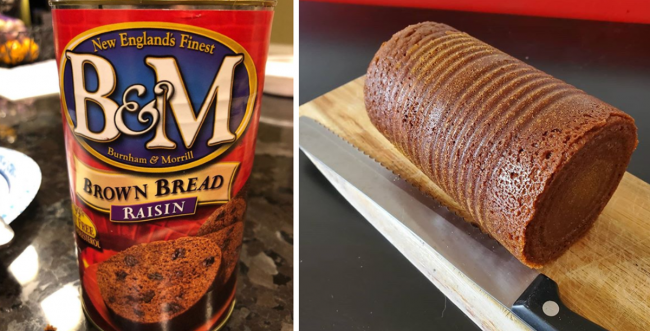 New Englanders have revived their ancient tradition, and canned bread is still a thing in some states, including Florida.

Canned bread was quite a thing in New England. People were buying B&M Brown Bread available in plain brown bread and raisin bread flavors. It was sold in cans. Buying canned food may not be that awkward, but canned bread? It looks like locals really loved the bread.

Do you know that this bread was first introduced to the market in the 1920s? Proceed this info to those who say that canned bread is actually a new thing.

Those who buy it swear by the combination of baked beans and B&M Brown Bread. One internet user said her family used to eat the B&M Brown Bread as a “yummy sweet delight.” There weren’t too many candies and sweets back in the days.

“I loved that! I remember as a little girl we didn’t have a lot of sweet treats around the house, so this was a yummy sweet delight,” a user named Kim Nupp wrote.

Not everyone shared the same opinion. “We used to cram as much in our mouths as we could then ask to be excused to the restroom so we could Christian the commode with it,” one person wrote.

When you’re in the grocery store perusing the aisles looking for suitable shelf stable sustenance in case we all go on lockdown and you run across the ultimate quarantine snack. Canned bread. Yes, folks that’s right -- there’s such a thing as canned bread. Slice it up, get it good & crispy in the panini maker, then slather it with butter while it’s still hot and ya got yourself a tasty little treat. #desperatetimes #desparatemeasures #whatwilltheythinkofnext #quarantinesnacks #cannedbread #cannedbreadisreal #corona #coronavirus #covid_19

The pandemic brought the canned bread to our supermarkets again

People across the globe are stockpiling food, and canned bread is a common item in our carts. Canned bread is commonly sold in New England, and some have seen it in Florida supermarkets. Go to Amazon and get your treat if you are interested in eating something like this!

If, like me, you were wondering what canned brown bread is all about, wonder no more. Tastes about like you’d expect it to… slathered with a generous portion of beanie-weenie it’s almost palatable! Wasn’t sure what kind of wine to pair with it, so I just had water. Lots and lots of water. #cannedbread #B&M #beanieweenie #quarantinefood

A B&M spokesperson said their product belongs to a small category, adding that they are “proud to create a product that’s beloved by consumers who want to keep the one-of-a-kind New England tradition going.”

Brown bread has significant importance for people in New England, and this tradition is definitely giving us ideas! Get yours on Amazon!