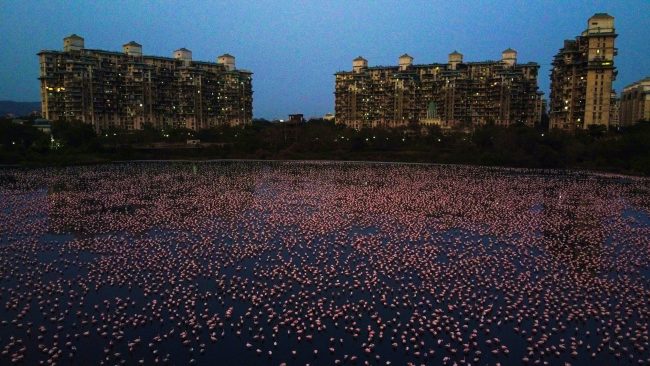 While a third of the entire world is facing numerous challenges due to the coronavirus pandemic, many parts of the planet have witnessed a return of nature due to the strict lockdown measures.

Numerous animals have apparently enjoyed this break, and India’s largest city, Mumbai, has now been taken over by flamingos!

Tens of thousands of the majestic large pink birds have been arriving recently, with many of them overrunning urban areas.

They have traditionally migrated to Mumbai metropolis during the October to March feeding and breeding season, but the calm and deserted streets have now boosted their population and have become their temporary home.

Deepak Apte, the director of the BNHS, explained that the lockdown measures this year “is giving these birds peace for roosting, no disturbance in their attempt to obtain food and overall encouraging habitat.”

He added that the successful breeding season two years ago and the destruction of wetlands on India’s eastern seafront might have contributed to the increase as well.

People started sharing photos online, showing flamingos lounging on the apartment buildings above the city’s wetlands and along the mudflats of Thane Creek, and painting the wetlands pink.

Flamingos in thane creek , Navi Mumbai .., no lockdown for them pic.twitter.com/hIt71YI2Pq

The large pink birds have been migrating to the city for their feeding and breeding season between October and March since the 1980s.

The Bombay Natural History Society (BNHS) explains that the Mumbai Metropolitan Region (MMR) is the second-largest habitat of flamingos along the west coast after Kutch, Gujarat, and they have started monitoring their numbers since May 2018, under a 10-year exercise.

This year, as BNHS researchers weren’t obviously unable to conduct field research and count the flamboyance of flamingos in person, they divided large-scale photographs into grids to digitally estimate the number of birds. They eventually concluded that over 150,000 flamingos made Mumbai their home in April, which is 25% more than last year.

Moreover, algae and plankton that comprise the diet of flamingos have proliferated due to the reduced discharge of industrial waste and increased sewage from homes.

According to BNHS Director Deepak Apte:

“A major reason for the large numbers is also the large flocks of juveniles moving to these sites, following the successful breeding documented two years ago.

Additionally, the lockdown is giving these birds peace for roosting, no disturbance in their attempt to obtain food, and overall encouraging habitat.”

Pictures clicked by my daughter Surabhi Agarwal from window in Navi Mumbai of Wetlands in Seawods forming part of National Wetlands Atlas which @CIDCO_Ltd is hell bent on destroying in the name of golf course despite warning by @BNHSIndia to preserve them for passengers safety. pic.twitter.com/RRh1TsLklk

Additionally, the Swiss-based air quality technology company IQAir reported that the air quality in March in Mumbai metropolitan area was the best ever recorded in 2020, and April 2020 was also on track to be the best April on record.

Mumbai: Amid #lockdown, flock of flamingos seen at #Bhandup wetlands on Friday. pic.twitter.com/w8gqaOm2bd

“The lockdown will at least prompt people to focus on what is around them, which they had been taking for granted, and hopefully this site will be declared a flamingo sanctuary soon.”