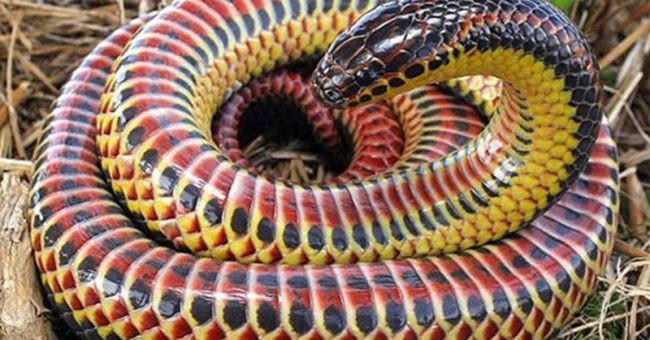 Snakes can make us feel like no other type of animal can. Historically, they have been considered symbols of rebirth, transformation, immortality, and healing.

Snakes belong to the animal class reptiles, together with lizards, crocodiles, and turtles, and play an important role in the natural environment and food webs. There are over 3000 species of snakes in the world, and they live almost everywhere, in forests, deserts, oceans, streams, and lakes.

While hiking through the Ocala National Forest, north of Orlando, a hiker found a rare species that haven’t been spotted in the area for more than five decades.

Tracey Cauthen discovered a beautiful, four-foot-long rainbow-colored snake, (Farancia erytrogramma) and The Florida Museum of Natural History confirmed it was the first one recorded in Marion County since 1969.

The Florida Museum of Natural History describes it as follows:

“Adults are large and thick-bodied. The back is iridescent blue-black with a bright red stripe down the middle and an additional reddish-pink stripe on each side. The lower sides of the body are yellow or pink fading into the red belly. Black spots on each belly scale form three lines of dots down the belly. The chin and throat are yellow.”

The average adult size of the snake is around 3 feet 6 inches, and it is nonvenomous and harmless. The museum explained that in case it is captured, it can press a pointed tail tip into a person’s hand, but “the tail is totally harmless and cannot sting or even break the skin.”

According to The Florida Fish and Wildlife Research Institute:

“Rainbow snakes are highly-aquatic, spending most of their life hidden amongst aquatic vegetation; seldom seen, even by herpetologists, due to their cryptic habits. Burrowing near creeks, lakes, marshes, and tidal mudflats, rainbow snakes specialize in eating eels, earning the nickname ‘eel moccasin’.”

These snakes are excellent swimmers and proficient burrowers, and they feed on frogs, tadpoles, and other amphibians as well.

Although they are rarely seen, their population is stable, and they are enlisted as a species of “least concern” in the International Union for Conservation of Nature Red List.

Yet, in 2011, a subspecies, the South Florida rainbow snake (Farancia erytrogramma seminola), was declared extinct. Before it disappeared, this lake lived in the Lake Okeechobee region in southern Florida.

If you are a hiker or a gardener, it is recommended to turn to experts for advice and research native snakes in the area.

If you spot a snake, you need to know how to respond. Dr. Nicholas Kman, professor of emergency medicine at The Ohio State University Wexner Medical Center, advises:

“The first thing to do is get away from the snake — don’t try to capture it, that’s just going to provide the potential for more people to get hurt. And then, they should immediately seek medical treatment, because these symptoms can progress rapidly.

We watch for redness, swelling, blistering, warmth and then signs of nausea, vomiting, muscle pain, and low blood pressure. If we start to see those, we administer the antivenom.”

Venomous snakes bite almost three million people a year around the world, but fortunately, only a fraction of these incidents are fatal.

Yet, the bites have dangerous symptoms that appear within a few hours, such as organ failure, uncontrollable bleeding, severe tissue damage, and paralysis that can restrict breathing.

If you get bitten by a snake, follow these tips:

“I’ve seen cases of hand bites where someone cut their hand and cut through a tendon. Venom is going to be absorbed into the body right away, so all you’re going to do is cause more trauma. You shouldn’t ice the bite, steroids shouldn’t be used, there’s a lot of things people do that aren’t going to help a snakebite, and are probably going to make the patient worse.”

“Putting a tourniquet on can actually increase local injury, and people can lose fingers or toes or need skin grafts.”