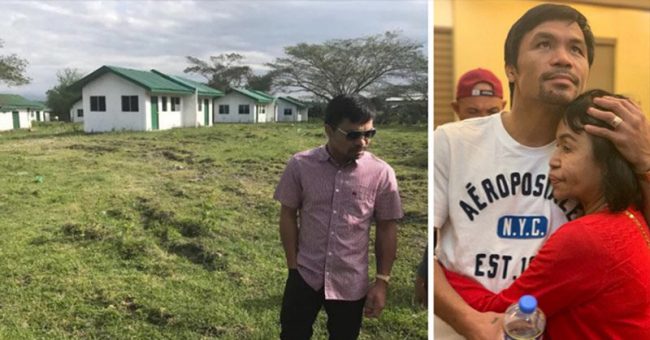 After “The Fight of the Century” against Floyd Mayweather, Filipino boxer Manny Pacquiao earned $1.5 million and spent all the money to build a thousand homes for the poor.

Giving is very important in life. Donating to charity not only benefits the charities themselves, but it is extremely rewarding for the giver too.

Giving is gratifying, and knowing that you do something to help others is immensely empowering.

Many people, who can afford it, donate to charities from time to time to support the causes they believe in, but only few decide to do the same as one of the best boxers of all time.

With the money of his winnings, Filipino Manny Pacquiao built homes for the poor, bringing hope to an entire community.

Back in 2016, Manny Pacquiao built 1000 homes for the poor residents of the Philippines, with the $1.5 million he got after “The Fight of the Century” against Floyd Mayweather.

His selflessness originates from the fact that he understands them, as he had been in their shoes before.

He was raised by a single mother in a family of six children, in extreme poverty. They lived in a cardboard shack in the Sarangani province of the Philippines, and there were days when the only thing they had was water to drink.

He was a young teenager when he left school and decided to seek a way and support his family. While trying to earn from boxing, he lived on the streets of Manila.

“I became a fighter because I had to survive. I had nothing. I had no one to depend on except myself. I realized that boxing was something I was good at, and I trained hard so that I could keep myself and my family alive.”

He eventually became one of the greatest boxers of all time, but he still remembers his struggles. He now uses his wealth and fame to help those in need.

Apart from being a boxing champion, he became a congressman in 2007, and then a senator. He is focused on the needs of his countrymen, due to” their trust and confidence” and this position gives him the power to help.

He says that this role is inspiring, and he uses it to improve the quality of life of the citizens. He spent more than 2 million dollars on land and building homes, and he gave them to the poor and homeless.

He says that many people who need help look up to him for inspiration. Yet, this is not the first time he helps the needy. He has given away food and money regularly.

“He sits in front of his house giving money away to people; they go for blocks. I’ve seen it. Food and money. Food and money. He believes that’s part of the higher purpose because once he gives it away, he believes God will replenish it.”

“There is a fighter in each and every one of us. As I share my story, I can only hope that I help you discover that gift, so that you can become that person who will soon inspire others to win their own battles.”

Fortunately, there are many altruistic celebrities, who use their power, money, and influence to improve the lives of people in need. Let’s contribute and hope that this number will increase, as generosity can dramatically change the world for better.