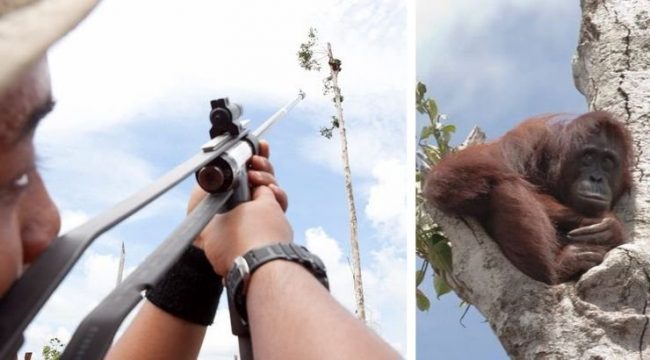 Humans keep destroying rainforests seeking profits in the lush jungle, but wild animal populations who have lived there have lost their homes, and are often displaced.

When massive bulldozers destroyed what was left of the rainforest in Borneo, an island in Southeast Asia’s Malay Archipelago, animal rescue workers filmed the tragic moment when a desperate, heavily pregnant orangutan Boon-Mee clung to one of the final trees.

As heavy machinery ripped apart her home, she was so weakened and traumatized that she couldn’t imagine leaving the tree trunk, even though she was unable to forage for food to feed herself or her unborn baby.

Across Indonesia, palm oil plantations have laid waste to what used to be the homes of orangutans, leaving them homeless. This vegetable oil is extracted from the fruits and seeds of the oil palm and is used in foods, biofuel, and various household products.

Every year, about 66 million tons of palm oil are produced, leading to numerous forests burned and land robbed to make room for plantations. This contributes greatly to global deforestation and the displacement of rural human populations, as well as local animal species endemic to the region.

Palm oil production has greatly driven orangutans to the brink of extinction, as they are now classified as critically endangered. The orangutan population drops by up to 25 daily.

About a hundred years ago, there were over 230,000 orangutans in Southeast Asia, and this number has decreased to 41,000 in Borneo and only 7,500 in Sumatra.

Hundreds of apes are slaughtered every year with guns and machetes in the drive for profits.

Yet, in this case, the plantation owners had a kind heart and reached out to UK-based charity International Animal Rescue (IAR) to seek aid for the expecting mom. The team, backed by local forest officials, came after several hours.

The IAR team spent hours scrambling over fallen trees, often having to wear masks as stumps had been torched and were still smoldering.

Then, they were surprised to find not only Boon-Mee but three other orangutans. One of them was Charanya, another mom who was found with her scared baby clinging to her back and both were very thin from malnutrition.

The other female orangutan Kalaya was still lactating, so it is thought to have had her baby snatched to be sold as a pet or killed before the rescue team arrived.

The frightened animals were desperately searching for food and had even resorted to eating bark from the trees they were trying to hide in.

Boon-Mee was still alive, but just barely, and she was too weak to climb down the tree.

Rescuers were forced to eventually shoot her with a tranquilizer, and they caught her in a net.

IAR official Lis Key said that fortunately, this time, the company did the right thing and saved the animals’ lives, instead of chasing them off or killing them.

However, they are the lucky ones, as Lis adds that there are hundreds of orangutans who won’t be so lucky because of the awful conditions they are forced to try to survive in.

All are the orangutans found are now recovering and have since been released into a new area of forest.

Yet, IAR is now urging a halt to any further land clearing as it is believed that there are other orangutans still trapped.

According to Karmele Llano Sanchez of IAR Indonesia, they were appalled at the condition of these orangutans, as they had all gone through long periods of starvation before they were rescued.

Alan Knight, chief executive of International Animal Rescue said that if the current destruction of the rain forest continues, he has absolutely no hope that any orangutans will remain in the wild.

He added that if we do not stop the destruction, orangutans will be extinct from the planet within 10 years, and the Sumatran will probably go before then.