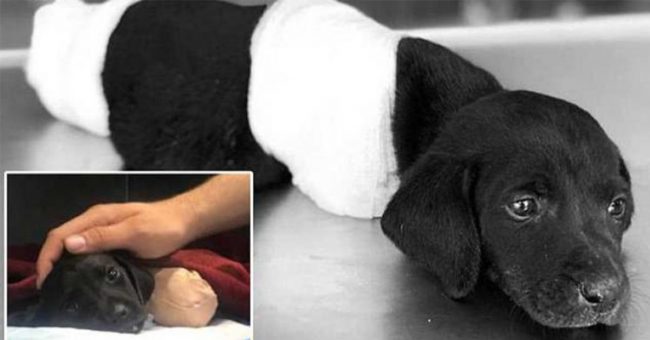 This story will bring tears to your eyes and pain to your heart. You don’t have to be a dog lover to feel the pain and the horror this puppy had to go through. No animal should be ever treated this way, and this one-month puppy fell in the hands of the wrong person.

In June 2018, in Sakarya, Turkey, the puppy was left to die in a bush. It was dumped in the bushes in a forest in the Spacan district. Believe it or not, some sick person had chopped off its legs and tail. The puppy would have been dead by now if it wasn’t for the hikers.

The pup was rushed to a veterinarian hospital, but didn’t make it. It died after two days in pain. The vet explained that it had lost too much blood.

Stand up for the innocent

The death of the poor puppy caused an avalanche of reactions. Animal lovers couldn’t believe the horror that happened to the puppy. They couldn’t ignore the photos of the puppy covered with bandages and a weak face.

The horrible incident broke the heart of thousands of people.

Nuray Ersoy is one of the volunteers who discovered the dog during an exercise. He talked to Dogan News Agency, explaining that the puppy’s legs were chopped off by a heavy-duty construction equipment.

Dr. Berktuğ Çiftçi, the vet who took care of the puppy, said it was hurt by a human being. According to him, the person used an ax.

The country was getting ready for elections, and the death of the innocent puppy was supported by several aspirants. President Erdogan won the elections, and promised his people a swift amendment of the Animal Rights laws, offering stricter sanctions for potential offenders.

The construction worker was arrested and interrogated for his sick action. President Erdogan said his government would never approve anything like this.

District Chief Prosecutor confirmed the arrest of the construction worker, but didn’t provide more details on the development of the case.

The initial reports suggest the killing wasn’t intentional. Erol Yildiz, a local, said it was actually an accident. According to him, it was a work accident and the real murderers are the people who leave dogs in the area.

Over a million animals are abused every year, and dogs account for 64% of all cases. There are dog owners who don’t take much care of their pets, and some of them even abuse them. We need stricter laws to prevent similar disasters.