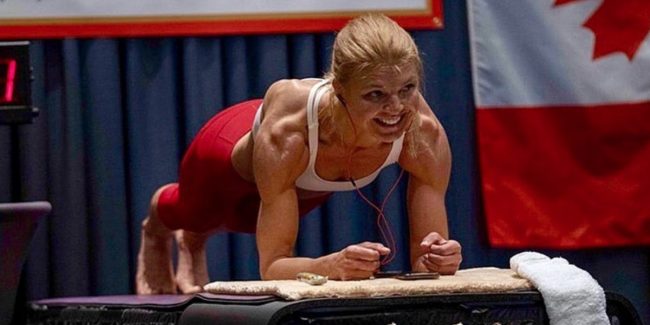 Being in a good shape has always been appreciated, but the most common excuse used to be that we simply lack time to go to the gym. Yet, one whole-body workout became a game-changer- the famous plank!

Planks are known to be one of the most efficient exercises, and they offer remarkable effects. However, if you have tried planking, you already know that holding the plank position for long is just too difficult.

An average human can hold a plank for 5 minutes at a stretch, but fitness blogger Dana Glowacka is as good as it gets in it.

She managed to smash the Women’s International Planking Record by holding the plank for 4 hours and 20 minutes. Before her, Maria Kalimera from Cyprus held the record, by holding a plank for 3 hours and 31 minutes.

Therefore, not only she smashed through the old record, but Glowacka also did it by almost an hour.

Yet, she didn’t get there overnight. She trained for years, after a comment from her son a year after Kalimera won her place in the record books. She contacted George Hood, the 2014 male holder of the longest plank, and started the training.

Under his instruction, Dana endured long training sets daily, just to make her con proud. She admits that her first attempt at a plank lasted a mere four minutes, but George inspired her to keep going.

Her hard work helped her take out second place in the International World Cup Plank Challenge in May 2016, and thus only spurred her on to go for the Guinness World Record.

On May 21st, she traveled from her home in Montreal, Canada, to the International Plank Marathon in Naperville in Illinois.

To support her in her quest, her brother came after a 24-hour trip to stand by her and watch her breaking the record.

Surrounded by friends, family, and supporters who encouraged her, she held her plank position on a stage for hours and hours.

“It was so lovely to see my family, friends and so many supporters from close and fare that helps me to hold strong till the ending line!”

Lewis the Koala, Who Drew Worldwide Attention After Rescue, Has Tragically Died