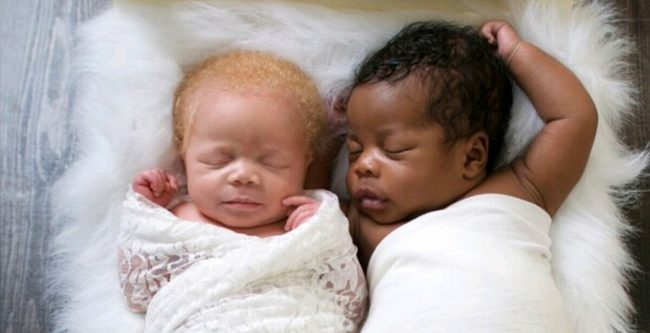 Can you name something cuter than a newborn baby? Well, only two of them! We all have a soft spot for twins, and the joy their birth brings is simply doubled!

However, one mother can be especially proud, as she have birth to two incredibly beautiful, but extremely different twins!

The babies of Nigerian-Canadian photographer Judith Nwokocha are something special! Kamis has dark hair, skin, and eyes, while his twin sister, Kachi, is an albino.

She struggled for eight years to fall pregnant but was successful after trying in vitro fertilization. She gave birth to her twins back in 2016.

Judith recalled that the second scan revealed that they were having twins, but she was told that they might have Down Syndrome. She added that At 7 weeks, “Kachi was always behind, was very small, she stopped growing”  and doctors even feared that she might not make it.

She wondered how is she going to be, and when she first saw her, she thought she was given someone else’s baby.

Before I formed you in the womb I knew you; Before you were born I sanctified you; I ordained you a prophet to the nations” (Jeremiah 1:5, NKJV) God knows you by name You are valuable You are beautiful You are worthy You matter Let this consciousness be in you today. #beinspired #Godfirst

After the shock, she said:

“I was just glad she was perfect- both were healthy and they just made me be stressed for nothing. Other than the fact that she is a different color, she looks exactly like me.”

Kachi is a perfect baby, apart from her sensitive eyesight and skin.

“It took me a while to realize I’m going to be raising an albino- I was really concerned about what people were going to say, it’s not a very usual thing to have an albino and a black baby.

I was also sad, I was worried about how she is going to go through society, how people are going to treat her.”

Yet, she explains that the twins have a strong bond, and she believes  “they haven’t noticed anything different”.

Hope everyone is staying safe out there. Be strong, we’re stronger than any virus 💪. No disease will come near our dwelling place Psalm 91:10, because we are covered by a great God. Have a great day y’all. 😘😘😘. . . . #twins #boygirltwins #twinsofinstagram #tmbetwins #twinsandmultiples #ankara #africanfashion #staysafe #naijaweddings #naijafashion

She went on to say that people are shocked when they learn that her children are twins, but she has never had any horrible comments about the twins’ different skin color.

People with albinism are often discriminated in Judith’s native country of Nigeria, so she was initially afraid that her daughter will face bullying in life.

Yet, over time, she started to see her differently, and found the beauty in the condition, “her gold hair, her brown eyes, her pink lips and everything about her.”

Nwokocha has embarked on a photography project to show the beauty of her daughter, and help her believe in herself.

“I’m showcasing the beauty in albinism by constantly taking pictures of her and twin brother. I’m not sure she’s aware of her uniqueness at the moment, but eventually she’ll know, and it’s my responsibility to educate her and teach her to love herself no matter what.”

Judith is so fortunate to be the mother of these adorable twins!