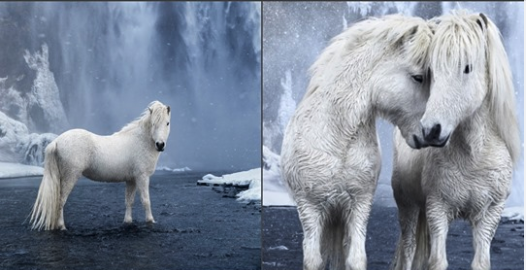 Numerous people visit Iceland and are fascinated by the Icelandic horses, which dramatically enrich the entire scenery of the country and offer magnificent experiences.

This special breed first arrived in Iceland with Norse settlers on Viking ships between 860 and 935 AD, and shortly afterward, in 982 AD, Iceland’s parliament passed laws prohibiting other horse breeds from being imported into the country.  This made the horse breed unchanged for more than a millennium.

These sturdy animals can be of various colors, and have an unusually long lifespan, living for an average of 40 years.

Selective breeding has developed a horse that is uniquely adapted to the harsh environment of the country, with thick winter coats that they shed in the spring, and keep them protected from snowstorms, high winds, or wading across freezing rivers.

These unique horses are Iceland’s pride and are very important in Norse mythology, where they were presented as being able to pull the sun across the sky.

Photographer Drew Doggett has captured an amazing series of images featuring these horses in beautiful landscapes, called In the Realm of Legends.

He has pictured them galloping and playing on snowy tundras, near waterfalls, and on black sand beaches.

Doggett started photographing in high school, and when he realized that it was his passion, he moved o New York and began apprenticing in fashion photography. He worked with popular photographers like Mark Seliger, Steven Klein, and Annie Leibovitz, and traveled the world.

In 2009, he went to Nepal alone, and while waiting out a snowstorm in the Himalayas with the sherpas who were guiding him, he had a revelation and discovered his unique perspective.

His aim was to tell the stories of those who had created a life and were thriving in challenging conditions, so the Icelandic horses were the ideal subject he was looking for.

He tried to capture the one-of-a-kind beauty of Icelandic horses, who majestically roam the territory, as well as the incredible landscapes that Iceland has to offer and thus created a combination of myth and fantasy, tales of folklore, and art.

During his time there, he stayed on a farm with hundreds of horses. He was initially inspired by the stories about the famous, eight-legged Icelandic horse named Sleipnir who is believed to be the spirit animal of the mythological god, Odin.

In his pictures, the sublime creatures gallop, graze, and stand proud, and even though he usually shoots in black and white, he decided to use color for this series.

The photographs capture snow-white and beautiful brown horses, in their powerful, yet, calm nature, amidst a wild landscape, contrasting against those pale, glacial blues and the dark shades of the sand and rocks.

In his own words, the series of photographs show the relationship between a noble, yet rugged, breed of horses and the challenging landscape they’ve written into their DNA.

Check out the following video to see these attractive horses for yourself:

Goodbye Nursing Homes! The New Trend Is CoHousing With Friends

Woman Creates Dog Hospice, Makes Sure Their Final Days Are The Best Days