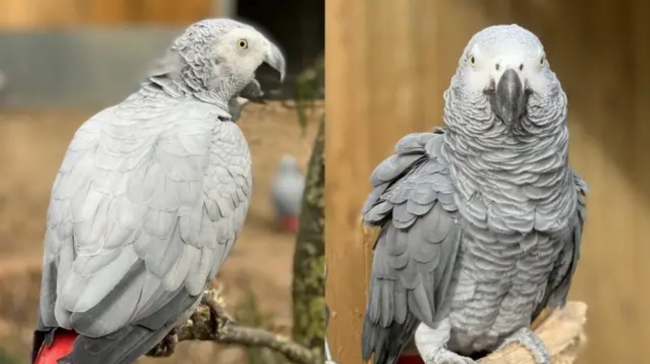 Due to them swearing at the visitors, a UK zoo was forced to remove a group of five parrots from the public.

The intelligence of parrots is extremely impressive and entertaining. They are also very social, so they make great pets. One can spend hours communicating and teaching these clever birds new things, and never get bored.

However, one UK zoo was forced to remove a group of parrots from the public just because their behavior became unacceptable!

The park management explained that the birds were adopted by the park from five different owners, and began their stay at Lincolnshire Wildlife Park on August 15.

Yet, while being quarantined in the same room together, they taught each other bad words.

Billy, Elsie, Eric, Jade, and Tyson, the naughty African grey parrots, had joined a colony of 200 other parrots of the same kind and quickly started motivating one another to begin swearing.

This is no surprise, as African gray parrots are the greatest mimic of human speech among 350 known parrot species.

CEO Steve Nichols said they are used to parrots swearing but they never had five at the same time. Plus, unlike other members of the parrot family, these ones really enjoyed it.

He added that the park has had parrots “that have sometimes had a bit of blue language” before as well, and it is “very comical”. Yet, this time, things escalated rapidly and went out of control.

“We took in five in the same week and because they were all quarantined together, it meant that one room was just full of swearing birds.

The more they swear the more you usually laugh which then triggers them to swear again.

But when you get four or five together that have learned the swearing and naturally learned the laughing, so when one swears, one laughs and before you know it, it just got to be like an old working men’s club scenario where they are all just swearing and laughing.”

After the lifting of the health restrictions and reopening the park, they were put back on display and they started cursing right away, and what’s worse, this time at visitors.

Nichols said that literally within 20 minutes after they were in the introductory they were told that the parrots had sworn a customer and “and for the next group of people, all sorts of obscenities came out.”

The visitors were, of course, not offended, and found that very funny and amusing.

“People have come to us, they think it’s highly amusing, we haven’t had one complaint. When a parrot tells you to f*ck off it amuses people very highly … It’s brought a big smile to a really hard year.”

Yet, they decided to withdraw the parrots from public display as they expected a rush of families during the weekend, especially children.

The parrots have been now removed to an enclosure surrounded by other parrots, in the hope the other noises will have a positive influence on them.

This park is the home to over 1500 parrots, and the last thing the staff wants is for the cursing practice to spread among them.

The five rascal parrots will be eventually released in separate areas of the park, to make sure that even if they do curse, it is not going to be as bad as a group of three or four of them doing it at the same time!

The Lincolnshire zoo parrots have been in the focus of the world attention before as well, when the footage of Chico, a nine-year-old yellow-crowned Amazon parrot singing Beyonce’s If I Were A Boy, went viral.