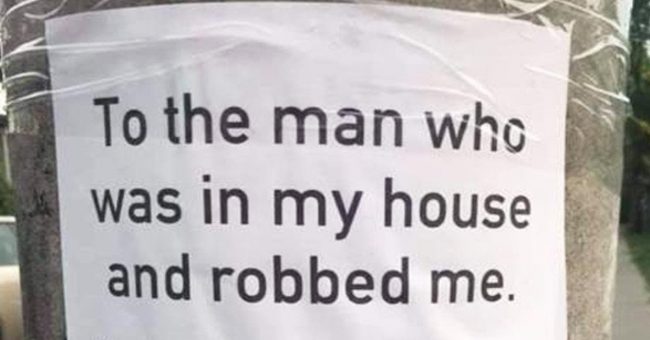 A dog owner has been robbed and wrote a letter begging the burglar to return the memory card with the photos of her dog’s last day alive.

Dog owners are fully aware of the quality of life they enjoy thanks to the company of their furry best friends. Dogs are simply the most devoted dogs, loving and caring, witty and playful, smart, and cuddly.

Therefore, there are no words to describe the pain caused by their loss.

One dog owner from Toronto, Canada, was still grieving the loss of his precious dog when a thief entered her apartment and stole her belongings, including a camera with a memory card that had photos of her late dog, ones from her last days among the living.

Therefore, the woman desperately tried to retrieve these valuable pictures and put a letter on a lamp post close to the Lansdowne subway station begging the thief to return them anonymously.

Her beloved pet, Shelby, had been suffering from cancer. Even though she had received treatment, she wasn’t responsive. The woman even stated that the thief can keep all he had stolen, but she kindly asked him to return her priceless memories.

Here is the letter:

“To the man who was in my house and robbed me. Keep the cash, and my DSLR, and whatever else you took.

But if you have the memory card from the camera, please, it has photos of my dog’s last day alive on it.

I cannot replace those photos. Please throw it onto the porch or put it in the mail slot. Or mail it.

Please. She died a few days ago. I cannot lose those photos as well.” 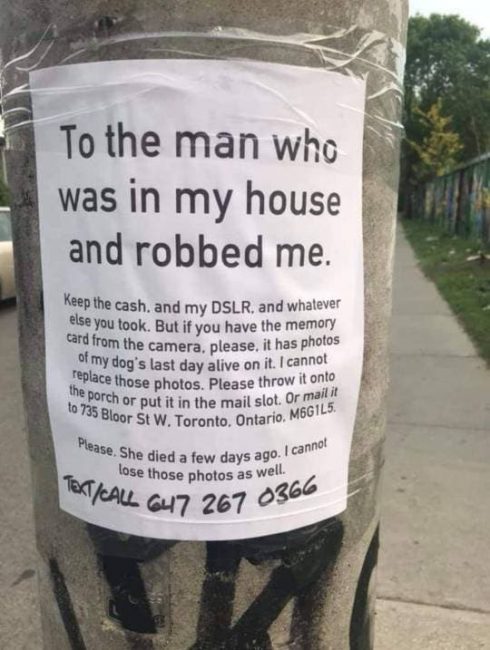 The heart-wrenching letter moved numerous people, and one of them, Saoirse Morgan, shared the image and wrote:

“Photo taken at Bloor and Lansdowne. This is simply heartbreaking. I hope this person does the right thing.”

Morgan’s post has been shared tens of thousands of times by people who tried to help, and she added:

“She’s an amazing woman and she’s gone through so much recently. Her dog was a rescue. About a month ago her dog went through surgery on her paw to remove cancer, only to later find out the cancer spread, and not long after, she had to put her down. She gives so much to the Toronto community and people and animals everywhere. For people debating the gender of the thief: she spotted him on his way out. T’was a guy.”

While the entire thing happened over a year ago, we can just hope that the robber has decided to return the memory card to the woman out of compassion.   If he hasn’t and reads this now, we would kindly ask you to do the right thing too.

Bring this woman the memories she strongly craves for and help her in these dark moments.