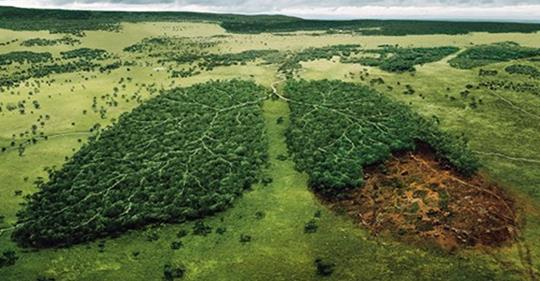 Unfortunately, the images that appear in our head when we think of the Earth as we know it are not completely accurate, as the planet has dramatically changed since our early school years.

Satellite images of once densely forested areas have revealed that the greenery has been receding over the years as deforestation clears away foliage for human industry.

Forests cover about 31 percent of the land on Earth, and trees produce oxygen by removing carbon dioxide from the air. Therefore, deforestation contributes to climate change, and can also disrupt livelihoods, as according to the World Wildlife Fund, 1.6 billion people rely on forests for food, fresh water, clothing, medicine, and shelter.

Deforestation also disrupts the water cycle of the region, leading to changes in precipitation, river flow, and flooding, as well as accelerated erosion. Forests are also the homes and habitats to some of the most exotic wildlife on the planet, and deforestation threatens many species with extinction.

Currently, around 30,000 square miles (18.7 million acres) of forests are lost annually and is this rate continues, we should all be frightened. Therefore, if we do not take action, the trend of the disappearance of forests will continue.

In 2016, Norway became the first country to pave the way to stop deforestation by banning it as a part of national law. The pledge was an idea of the Norwegian Parliament’s Standing Committee on Energy and Environment as part of the country’s Action Plan on Nature Diversity.

Also, the country announced that any company that contributes to deforestation will not be supported by the government.

Norway has been dedicated to reducing massive deforestation and expanding its forests a lot in the last decade. It is actually deforested by about 58 square kilometers each year, which is very small, but it is aware of the extremely detrimental effects of deforestation, so their efforts ensure that their total forest area remains relatively constant, if not increases, each year.

Between 2011-2015, the government contributed a total of $250 million to protect the forests of Guyana, which were in danger due to the excessive logging industry. In 2008, it donated $1 billion to Brazil to combat deforestation of the Amazon Rainforest, and it led to a 75 percent decrease in deforestation by 2015.

The commitment and hard work of world governments like Norway provide hope that we will see our forests flourish in the future, and do the groundwork for global engagement against deforestation.

We can all take action and engage in order to ensure a deforestation-free future for the next generations. We can start small, and contribute to a greater cause. Here are some tips you can follow: