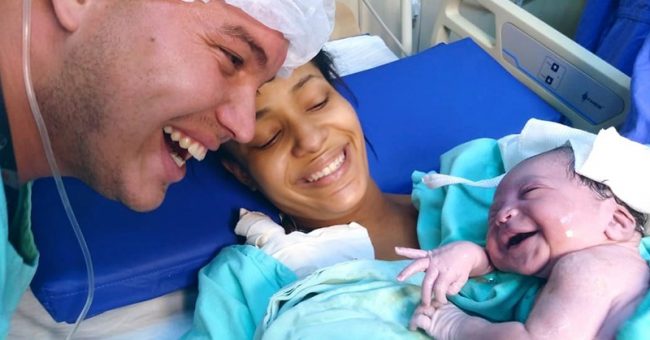 Fathers and daughters seem to have some special bond, and the story of Flávio Dantas, of Rio de Janeiro, Brazil, is another proof of it.

This father was so excited to meet his daughter, that he spoke to her all the time, even when she was still in her mother’s belly.

Tarsila Batista, his partner, explained that every morning before she went to work, Flávio would greet her baby, and stroke her belly, saying: “I’ll always be there”. Whenever he did this, the baby would start to kick and move.

Baby Antonella was born at Marcílio Dias Naval Hospital in Rio de Janeiro, on August 11th, 2019: Father’s Day in Brazil, and she will definitely be a daddy’s girl!

When the medical team handed baby Antonella to her parents for their first meeting, she was sleeping. Tarsila recalled that they put the baby on top of her, sleeping.

This time again, Flávio leaned in close to say “hello”, and repeated the same words once more. But this time, Antonella responded by opening her eyes and giving him the biggest smile!

The unique moment was caught on camera and the picture has gone viral ever since.

People from all over the world share the joy and happiness that can be seen on the faces of the parents as this baby smiles.

On the day little Antonella came into our world, she’d already spent many weeks and months hearing her daddy talk to her.

Babies can process sounds starting as soon as 16 weeks after conception, so by 26 weeks of age, they already react to noises from the outside world and can be even soothed by their parent’s voices.

Antonella’s mommy described her as “a gift sent by my Lord,” while Flávio was simply overwhelmed by this life experience. He said that his love for his baby daughter is “too big to fit inside his chest.”  He added that at that point, he was sure what love is.

We bet he will never forget that fantastic day!

Tarsila has been bitten by the love bug just as intensely as the father, and when they got home, she posted a picture of herself with her baby girl, and shared her love with the world. She wrote:

“If wealth were measured in words I would sum it up in one: you. My rare jewel cut by the hands of God.”

And we can clearly state that Antonella is a lucky girl as well, as she has such kind-hearted parents!