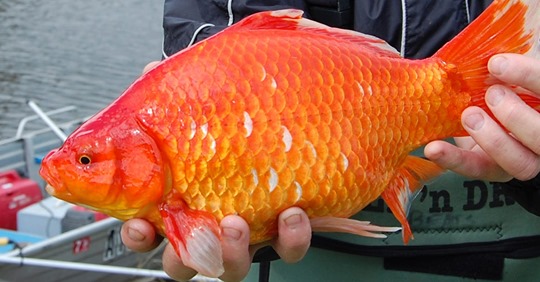 Goldfish turn into pests after being flushed down the toilet and straight into local waters, causing too much damage to the ecosystem.

What happens when you flush a “dead” goldfish down the toilet? It finds its way into local lakes and water systems, causing damage.

Yes, you read it right. Owners flush dead golden fish without even thinking of the possible consequences. Believe it or not, the cuties aren’t always dead.

If the goldfish isn’t “dead yet” it will definitely make its way into local waters. Experts at the Department of Fish and Wildlife flushed fish can easily turn into an eco-disaster that destroys local fish population. That’s exactly what happened in Washington state. Thousands of pet goldfish invaded West Medical Lake. Authorities will have to spend $150,000 to contain the feral fish.

Goldfish is the most invasive species

Biologists explain that goldfish are one of the most invasive fish in the world’s waters. They threaten hundreds of other species, causing an uncontrollable disaster.

Goldfish don’t grow too much in their fishbowls. But, once they hit open waters, they turn into giants, and yes, they eat a lot. Goldfish eats fish, plants, insects, and even crustaceans.

This species kick up mud and sediment, sending harmful algae blooms straight into the ecosystem.

“Once you introduce something into a new environment — even if it’s a cute, cuddly aquarium fish — it can have quite unexpected, serious biological consequences,” said Stephen Beatty, a researcher at Murdoch University.

How can you prevent an invasion? Stop flushing fish down the toilet! First, confirm whether your goldfish is really dead.

Here are some helpful tips:

Instead of flushing goldfish down the toilet, bury It deep in the soil and place a rock so cats don’t put their claws on it. Throwing fish in the garbage is evil. That thing was thriving in your home for a long time. You can at least say the last ‘goodbye’ in a decent way.