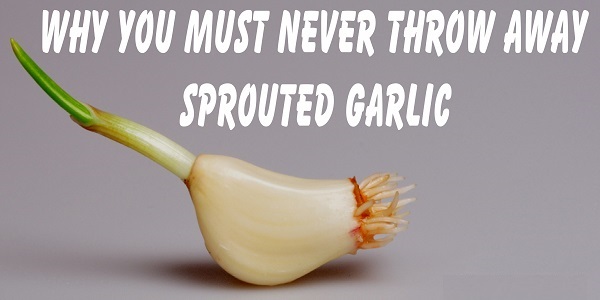 “Sprouted” garlic are actually the old garlic bulbs which have  bright green shoots sprouting from the cloves. Almost  all of us regularly throw it away, completely unaware of the potential benefits it can bring.

Namely, certain sprouted foods can be hazardous as they release toxins which may have a harmful effect on our body. However, on the contrary, sprouted garlic can be extremely useful.

A study, which has been funded by Korea’s Institute of Planning and Evaluation for Technology,  and was published in the ACS’ Journal of Agricultural and Food Chemistry, showed that the antioxidant properties of the sprouted garlic are even stronger that the fresher, young garlic.

The studies of Dr, Mercola has found that the consumption of raw garlic regularly can provide numerous health benefits, such as:

The research team included in this study were aware of the fact that as seedlings turn into green plants, they create numerous compounds, as well as those that preserve the plant from pathogens.

This has been explained by one of the researchers,  Jong-Sang Kim:“Plants are very susceptible to attack from bacteria, viruses, and insects during sprouting. This causes them to produce a variety of chemicals called phytoalexins to defend themselves. Most of these are toxic to microorganisms and insects, but beneficial to human health.”

Kim and his colleagues have suggested that a similar process might  take place when green shoots grow from old garlic cloves. It has already been found sprouted grains and beans have more powerful antioxidant properties than the unsprouted ones, and this has stimulated these experts to find out whether this is the case with garlic as well.

Therefore, their conclusion was that sprouting is a potentially feasible method to raise the antioxidant potential of this vegetable.

Yet, researchers have still not determined the concrete mechanisms behind the raised antioxidant levels discovered in sprouted garlic.

Furthermore, this does not mean that you should avoid regular garlic and consume sprouted one only. Yet, it is advisable that you incorporate sprouted garlic in your diet.

Garlic is extremely beneficial for your health, as it strengthens your immune system, promotes heart health, has powerful anti-inflammatory properties, and inhibits 14 types of cancer cells. Also, it contains a compound high in sulfur, called allicin, which effectively destroys viruses, fungi, bacteria, and parasites, but causes no toxic side effects.

8 Signs That You Are Not Drinking Enough Water