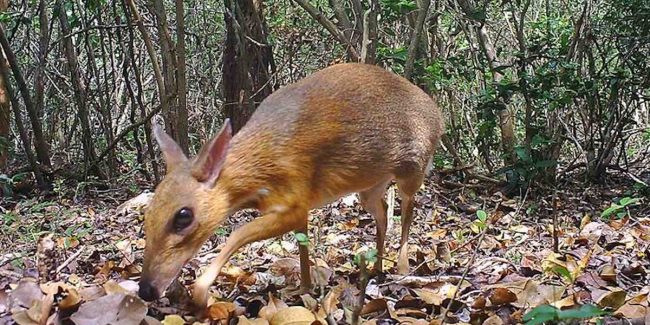 In times when nature shows the extent to which out maltreatment of the environment has harmed it in many ways, good news came from Vietnam.

Researchers have spotted a rare mammal in the forest, that was believed to be extinct for decades. Last seen in 1990, a small, deer-like species, about the size of a rabbit, known as the “silver-backed chevrotain”, has appeared in the Vietnamese wilderness.

It was captured on video and photos by researchers, and it became the first mammal to be “rediscovered” on the Global Wildlife Conservation’s (GWC) top 25 most wanted lost species in the Search for Lost Species.

The animal was discovered in southern Vietnam, and the findings were published in the scientific journal Nature Ecology and Evolution.

An Nguyen, an associate conservation scientist for GWC and expedition team leader, said:

“For those of us living in Vietnam and working in wildlife conservation, the question of whether the chevrotain was still out there and if so, where, has been nagging us for years. There was very little information available to point us in the right direction and we didn’t know what to expect.

So, I was surprised and overjoyed when we checked the camera traps and saw photographs of a mouse deer with silver flanks. For so long, this species has seemingly only existed as part of our imagination.

Discovering that it is, indeed, still out there, is the first step in ensuring we don’t lose it again, and we’re moving quickly now to figure out how best to protect it.”

Chevrotain, also called the Vietnamese mouse deer, was initially described in 1910 during a Russian expedition to Vietnam, but little was known about the general ecology or conservation status of the species. This is why it is one of the highest mammal conservation priorities in the Greater Annamite mountains.

After local villagers and government forest rangers informed them about the existence of the mammal, researchers set three camera traps for five months in an area of southern Vietnam, that snapped 275 photos.

They later set up another 29 cameras in the area, and after five months, they had 1,881 more photographs of the chevrotain.

Scientists found that the small mammal had fallen victim to habitat loss and intensive hunting for the illegal wildlife trade.

“The rediscovery of the silver-backed chevrotain provides a big hope for the conservation of biodiversity, especially threatened species, in Vietnam. This also encourages us, together with relevant and international partners, to devote time and effort to further investigate and conserve Vietnam’s biodiversity heritage.”

Most chevrotains are found in Asia, but there are 10 known species of them on the planet. They are neither a deer or a mouse, but the world’s smallest small ungulates (hoofed mammals).

These cute animals are shy and solitary, weighing about 11 pounds. They walk on the tips of their hooves and have two tiny fangs.

Co-lead author Andrew Tilker, also of GWS, described the tiny ungulate as ‘about the size of a house cat’:

‘You could hold it in one hand. Because it is so small, it would under natural conditions have a number of predators, including any leopard, tiger or wild dog -- or probably even a python. However, most of these species are now very rare or extinct in Vietnam. The silver-backed chevrotain’s only real predator now is man.”

Researchers are now investigating how large is their population. The team of researchers started camera trap surveys in two additional areas, to gather the needed information for them to develop a conversation action plan.

Tilker explained that their priority is to reduce the widespread use of snares to capture animals for the wildlife trade. In this way, they will also protect other important species, like several mammals and birds only found in the Greater Annamites ecoregion, that are threatened with extinction

“It is an amazing feat to go from complete lack of knowledge of the wildlife of the Greater Annamites 25 years ago to now having this question mark of the silver-backed chevrotain resolved.

But the work is only beginning with the rediscovery and initial protection measures that have been put in place—now we need to identify not just a few individuals on camera traps, but one or two sites with sizable populations so that we can actually protect and restore the species.”