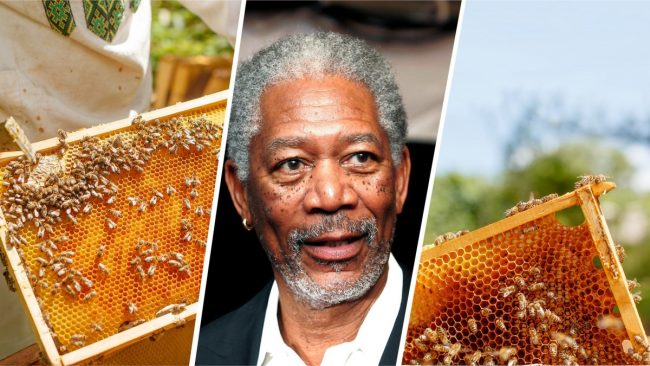 Everyone loves Morgan Freeman, and this amazing actor, filmmaker, and director has played numerous roles in his long career in Hollywood.  However, his newest one is of high importance for all of us. Namely, he decided to help and invest to revive the bee population.

Unfortunately, bees are dying off at an alarming rate, and people all around the world are trying to help. Many plant flowers for bees to visit, petition to stop the use of pesticides that destroy bees, and even start keeping bees.

Over the recent years, bee populations have been decreasing steadily across the globe, and only in the United States, there was a ginormous 44% loss between 2015 and 2016.

According to the National Resources Defense Council (NRDC), researchers are calling the mass disappearance ‘Colony Collapse Disorder’” and “the number of hives in the United States is now at its lowest point in the past 50 years”. They are still investigating the main cause of colony collapses, but it is widely recognized that environmental damage has a huge negative effect on their ecosystem.

Yet, these humble insects are playing an essential role in the health of our environment and its ecosystems. They are largely responsible for regulating our food supply by pollinating of crops.

Just 2% of bees have been found to be responsible for pollinating 80% of our crops, so if these extremely hard working creatures disappear, 80% of our food from crop cultivation will disappear too, including apples, oranges, avocados, blueberries, broccoli, onions, almonds and so much more.

Bees are also vital factors when it comes to feeding other living organisms (plants and animals alike). They are an integral part to numerous ecosystems and their loss means losing birds, mice, squirrels, flowers, and weeds.

Therefore, Morgan Freeman decided to turn his 124-acre ranch in Mississippi into a sanctuary for wild bees with bee-friendly plants like fruit trees and clover, magnolia trees and lavender.

In an interview in 2014, he told Jimmy Fallon that he had a new hobby, and took beekeeping just two weeks before, and explained his experience. He even admitted not wearing a protective beekeeper’s suit or veil when tending to his precious pollinators, since he developed the needed skills.

He explained that we do not realize that bees are the foundation of the growth on the Earth, but there is a concerted effort for bringing bees back onto the planet. He admitted having a lot of flowering plants and a gardener, who takes care of the acres and acres of clover, lavender, magnolia trees, and more.

He explained that he started his hobby as a result of the mass bee die-offs during the past several years, and he imported 26 hives full of bees from Arkansas and started feeding them sugar water.

He also revealed that he has not ever used the beekeeping hat with the bees, and they haven’t stung him yet, since he only feeds them.

Even though it is not easy to measure the effects of his efforts on the larger bee populations in North America, his story should serve as an example to remind us that we can all do something to save the bees and prevent the extinction of those hard-working tiny living creatures.