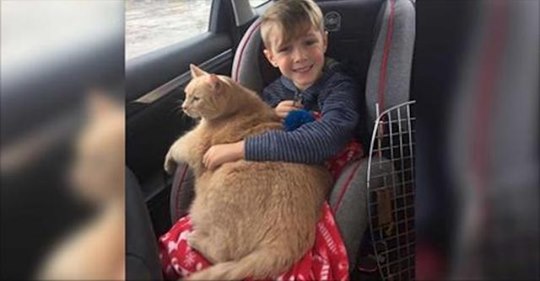 Even though most kids would rather have a puppy or kitten when told to pick any pet from an animal shelter, one young Canadian boy he chose a 10-year-old, giant orange cat!

Easton was very excited about adopting a new pet, and his mother told him he could choose the animal himself. They were looking at the Facebook page of the Exploits Valley SPCA, a shelter located in central Newfoundland, Canada.

The shelter had recently taken in two cats named Tiny and Trinity. Due to unfortunate and unforeseen circumstances — their owner needed to drop them off at the shelter.

Tiny and Trinity were in foster care waiting for a new family, but as they were not bonded, and it can be so challenging to rehome overweight senior cats, the animal shelter was allowing them to be adopted separately.

The shelter had posted their story on their Facebook page hoping that families would notice them and decide to adopt them. Yet, they believed it was going to be challenging though, as they were a little older and Tiny was quite fat and a little overweight.

The shelter added that Tiny wasn’t a picky eater, but was ‘weight-challenged’ and “has a big round belly that he loves to have rubbed.”

He told his mom that Tiny was the cat he wanted, so when they went to the shelter to meet him, the two instantly fell in love with each other.

“Easton loved Tiny because Tiny loved him. He was never withdrawn around him from the second he saw him.”

After completing the adoption process, they placed Tiny in a carrier in the backseat next to Easton for the drive home. Although the shelter called the big cat “shy”, it did not take long for him and Easton to become best friends.

During the journey, the cat wanted to get out of the cage and snuggle with Easton.

The animal shelter posted a photo of it, adding that the cat “ has been stuck to him ever since.”

They added, “Great job Easton, Tiny is one lucky cat!”

Easton’s family already had another cat. They adopted Oscar, an “extra fluffy” cat when he was three years old. When Easton was looking for another pet, he told his mom that he wanted another cat like Oscar.

The choice of the young boy pointed out the plight of senior cats in animal shelters, which are often overlooked. Yet, his mother explained that he always takes to personalities and temperaments over size or shape, so “as soon as Tiny nuzzled into him, that was it!”

People wrote they were more than thrilled to read about the amazing decision of the young Easton, claiming the two are an awesome team together!

Man Asks Valid Question: "Why am I Taxed on the Solar Energy that I Generate Myself?"