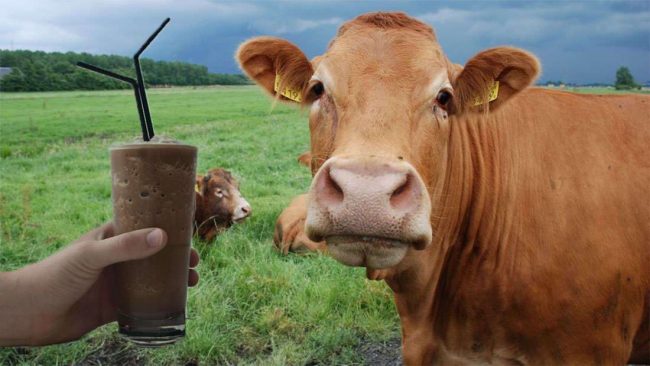 The top frequently asked question on the Innovation Center for US Dairy’s website is: “Does chocolate milk come from brown cows?”. The answer is polite and clear- they explain that chocolate milk is white cow’s milk with added flavoring and sweeteners.

Yet, a survey by the Center showed that a whopping 7 percent of Americans, or 16.4 million people nationwide, still believe that chocolate milk comes directly out of a brown cow.

What’s more, 48% of respondents admitted they weren’t sure where chocolate milk comes from, which is about 154,272,000 potential voters who are not actually sure that the answer is simply ”cows”!

This is just an example that many Americans are completely uninformed about where their food comes from.

Moreover, a study conducted by the Innovation Center for US Dairy found that 37 percent of people secretly drank milk straight out of the container in the fridge, in extremely poor milk/fridge etiquette, and another 29% use their children as an excuse to buy chocolate milk for themselves.

Observers in agriculture, nutrition, and education have warned that many Americans are basically agriculturally illiterate for decades. They claim that these people are not aware of the ways food is grown and stored.

Additionally, one study conducted by the Department of Agriculture, commissioned in the early ’90s, discovered that 1 in 5 adults did not know that hamburgers are made from beef. Also experts are not convinced that much has changed in the intervening decades.

Cecily Upton, co-founder of the nonprofit FoodCorps, which brings agricultural and nutrition education into elementary schools, says that it is an exposure issue, as nowadays, we are conditioned to think that if you need food, you go to the store, so our children are not taught where food comes from before that point.

Researchers interviewed fourth-, fifth- and sixth-graders at an urban California school, and discovered that more than half of them didn’t know that lettuce and onions were plants, and that pickles were cucumbers.

Therefore the writer and historian Ann Vileisis comments that the indifference about the origins and production of foods became a norm of urban culture. She also says that in a very short time, the average distance from farm to kitchen had grown from a short walk down the garden path to a convoluted, 1,500-mile energy-guzzling journey by rail and truck.