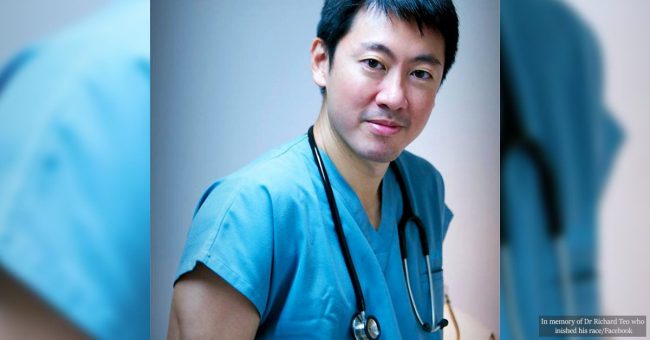 Dr. Richard Teo Keng Siang was a man who has learned the most important lesson in life when he realized that he is spending his last days on Earth.

By the time he was in his 30s, Teo had everything: wealth measured in millions of dollars, a thriving aesthetics practice and sports cars. He admitted that money was everything for him back then. Since young, his driving ambition was to win, and through winning, reap the rewards of the good life.

In a speech that became viral, he said:

“I am a typical product of today’s society. Since I was young, I have always been under the influence and impression that being happy is equal to being successful. And to be successful is to be wealthy. So I led my life according to this motto.

At one point in life, he was eager to start making more money and switched from a career in ophthalmology to aesthetics. The move proved to be wise, and he earned millions in just his first year of practice.

This enriched his life, he started spending weekends at automobile club gatherings, racing with his wheels of choice, visited the finest restaurants, and socialized with high-ranking celebrities. He had a collection of at least four supercars including a Nissan GTR, Subaru WRX, Honda S2000 and Ferrari 430.

He found himself bumping into famous people and celebrities, like Eduardo Saverin, the co-founder of Facebook, and Rachel Kum, who was crowned Miss Singapore Universe in 2009. His life had no end of entertainment and success. He was at the peak of his ever-rising career, and everything was under his control.

This made him fall into the dark abyss of depression. He had so little time, and time flies, so this made him realize that all his cars, his house, his success, everything that he had earned so far, were of no use to him in the real sense of the word.

“See, the irony is all these things I have, the success, the trophies, my cars, my house and all. I thought all that brought me happiness. But having all these thoughts of my possessions, they brought me no joy.”

He regretted focusing on the struggle to make money, and thus neglected God. As his body was becoming weaker, he found out that life is much more than a heavy wallet.

He said that money is not the source of happiness, but it might be the root of all evil.

Yet, as time went by, during his last days among the living, the only thing that made him happy and fulfilled was spending time with people. He found joy in the fact that his friends and his family interacted with him, cared about him, and understood the pain that he was going through.

“True joy I discovered comes from interaction. Over the last few months, I was so down. Interaction with my loved ones, my friends, my brothers in Christ, my sisters in Christ, and only then was I able to be motivated, able to be uplifted. To share your sorrow, to share your happiness – that’s true joy.”

“Not knowing about God – I mean, you can read the bible and know about God – but knowing God personally; getting a relationship with God. I think that’s the most important. That’s what I’ve learned.

So if I were to sum it up, I’d say that the earlier we sort out the priorities in our lives, the better it is. Don’t be like me – I had no other way. I had to learn it through the hard way.”

Videos of his speeches and his quest to reach out to others in hardship went viral after his death on Oct 18, 2016, at age 40.

“When I faced death, when I had to, I stripped myself of everything and I focused only on what is essential. The irony is that a lot of times, it is only when we learn how to die that we learn how to live.”

At the end of his speech, he added:

“There is nothing wrong with being rich or wealthy. I think it’s absolutely alright, cos God has blessed. So many people are blessed with good wealth, but the trouble is I think a lot of us can’t handle it. The more we have, the more we want.

“I think that I’ve gone through it, and I know that wealth without God is empty. It is more important that you fill up the wealth, as you build it up subsequently, as professionals and all, you need to fill it up with the wealth of God.”

Hunter Dead After Deer He Shot Gets Up and Attacks Him

The Gluten Free Rice That Detoxes Your Body & Improves Digestion