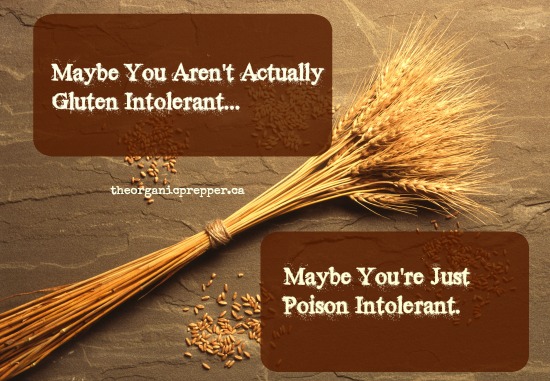 Many of you have probably had the unpleasant experience of having your blood work done in order to confirm whether you are gluten intolerant, and yes, most of you are just told “No, you are just crazy.” Some are terribly ill before they cut wheat out of the menu.

This has happened to so many people, they pass the test for anti-gliadin antibodies, but they are still aware that their health problems are directly associated with the food they eat.

Well, today you can be pretty sure why is it so. The results of your tests were right. You are not gluten intolerant, but poison intolerant.

A real mind-blowing article will sure put it all together for you. (Please read the entire piece by Sarah, the Healthy Home Economist).

“Standard wheat harvest protocol in the United States is to drench the wheat fields with Roundup several days before the combine harvesters work through the fields as withered, dead wheat plants are less taxing on the farm equipment and allows for an earlier, easier and bigger harvest.”

Pre-harvest application of Roundup, a herbicide, and many other herbicides “enriched” with glyphosate, a deadly active ingredient, to wheat and barley, that were supposed to serve as a desiccant, was suggested as early as 1980.

In the conventional farming community this has become a routine over the past 15 years, and people use it as a drying agent 7-10 days before the harvest.

Dr. Stephanie Seneff of MIT who did a research based on this issue and saw present on the subject at the nutritional Conference in Indianapolis, says that desiccating non-organic wheat using glyphosate right before the harvest actually came into vogue in the 1990s, and as a result, most of the non-organic wheat in the States is contaminated with it.

Seneff also added that when wheat is exposed to toxins like glyphosate, it can release more seeds, resulting in a slightly greater yield: “It ‘goes to seed’ as it dies. At its last gasp, it releases the seed.”

The US Department of Agriculture says that as of 2012, 99% of durum wheat, 97% of spring wheat, and 61% of winter wheat have been “enriched” with Roundup, which was of course considered as part of the main harvesting proess. This has brought an increase from 88% for the durum wheat, 91% for spring wheat and about 47% for the winter wheat since 1998. (source)

It is quite horrifying to find out that they add this toxin to the food we eat just days before the harvest. It is the most toxic, prevalent herbicide out there, and it is associated with all sorts of health problems. What is worse, it cannot be removed -- it is milled with the wheat together and ends up in our bags of flour, loaves of bread and our favorite desserts.

This is a great explanation why some people with serious gluten symptoms can eat products from organic Einkorn wheat. It does not have to mean that it is the heirloom Einkorn -- maybe it is just not “enriched” with glyphosate.

Modern farming kills us. Check this little rundown on glyphosate:

A more alarming study, which got accepted to be published in the journal Food and Chemical Toxicology last month, found that glyphosate, the world’s most commonly used herbicide thanks to the great use in genetically engineered agriculture, can drive estrogen receptor mediated breast cancer cell proliferation in infinitesimal parts per trillion.

Another study related with this issue showed that the consumption of glyphosate can damage intestines, which is the beginning of a great number of human diseases, including diabetes, gastrointestinal disorders, heart disease, obesity, autism, Parkinson’s and Alzheimer’s.

Another classification of certain allergy-type foods emerges and gets recognized for its negative effects on the gastrointestinal tract.

These foods are known as GMOs or GEs. Yes, we are talking about genetically modified organisms. A scientific research which indicates the intestinal damage induced by GMO foods in the article “Glyphosate’s Suppression of Cytochrome P450 Enzymes and Amino Acid Biosynthesis by the Gut Microbiome: Pathways to Modern Disease” shows how the large amount of pesticides sprayed on GMOs actually leaves dangerous residues in the GMO crops, which of course are linked to modern diseases. (source)

According to the Organic Consumers Association:

Glyphosate is the most widely used herbicide in the world.  According to the EPA, at least 208 million tons of Roundup were sprayed on GE crops, lawns and roadsides in the years 2006 and 2007. In 2007, as much as 185 million pounds of glyphosate was used by U.S. farmers, double the amount used just six years ago.

A study conducted in 2009, showed that every year Americans use approximately 100 million pounds of glyphosate on their lawns and gardens.

It is pretty much safer to consider that these numbers are a lot higher now. Why is it so? The GE crops today are invaded by new strains of “superweeds” that are herbicide-ressistant and require higher amounts of poison.

Beyond Pesticides has offered an extensive evidence of the past research associating glyphosate to to increased cancer risk, neurotoxicity and birth defects, eye and skin, respiratory irritation, lung congestion, an increase in the breathing rate, damaged pancreas, kidney and testes.

Glyphosae endangers the environment as well. It destroys soil and plants, and as shown before, it is linked to a host of health hazards. The EPA’s previous decision on increasing the allowed residue level of glyphosate is now out of date, affects health and the environment, and of course it is scientifically unsupportable.(source)

All of the problems we link to gluten intolerance may actually be related to glyphosate exposure. This terrible farming shortcut may create an epidemic across the country.

One man bought a loaf of organic sourdough bread to serve with his homemade beef stew.

He was surprised not to struggle with any abdominal pain, bloating and upset stomach after eating it. And, yes, the first thing he thought was “I ate some bread and I am still alive!” How sad is that?

Sara’s article blew our mind, because when we checked it, all inconsistencies with the most common gluten issues started making sense.

This explains why you can eat delicious Italian pasta, and also why the odd baked goodies from the organic bakery do not make you sick. This is the answer to the problem, this explains the blood tests that show you have no problems with gluten, although your gut does not agree with that.

Say no to Big Food. Take more care about your wallet and do not eat food that contains poisoned wheat. Avoid eating wheat products completely or just go for organic  wheat products.

Now you can change your family diet. It is less expensive to buy a bag of organic flour than that gluten free flour you use to make your favorite baked goodies and pancakes.

This article is reproduced with permission from TheOrganicPrepper. Please check the website out–it’s great and you should honor Daisy Luther’s guidelines for republishing.

Please feel free to share any information from this site in part or in full, leaving all links intact, giving credit to the author and including a link to this website and the following bio. Daisy Luther lives in a small village in the Pacific Northwestern area of the United States. She is the author of The Organic Canner and The Pantry Primer: How to Build a One Year Food Supply in Three Months. On her website, The Organic Prepper, Daisy uses her background in alternative journalism to provide a unique perspective on health and preparedness, and offers a path of rational anarchy against a system that will leave us broke, unhealthy, and enslaved if we comply. Daisy’s articles are widely republished throughout alternative media. You can follow her on Facebook, Pinterest, and Twitter, and you can email her at daisy@theorganicprepper.ca

Resources linked in TheOrganicPrepper‘s article:
MUST READ!!!!! The Real Reason Wheat is Toxic (it’s not the gluten)
The Gluten Connection: How Gluten Sensitivity May Be Sabotaging Your Health – And What You Can Do to Take Control Now
Wheat Belly: Lose the Wheat, Lose the Weight, and Find Your Path Back to Health
Grain Brain: The Surprising Truth about Wheat, Carbs, and Sugar–Your Brain’s Silent Killers
Gluten Intolerance Isn’t Just a Fad: It Can Wreck Your Whole Life
Gluten Intolerance: Is It Just a Fad or Is Today’s Wheat Really Toxic?
How to Go Gluten-Free Without Contributing to the Billion Dollar Big Food Rip-Off

USDA on Board With Shipping U.S. Chickens to China For Processing, Then Re-Entry to States for Human Consumption

Oil of Oregano: A Powerhouse for the Alternative Medicine Cabinet